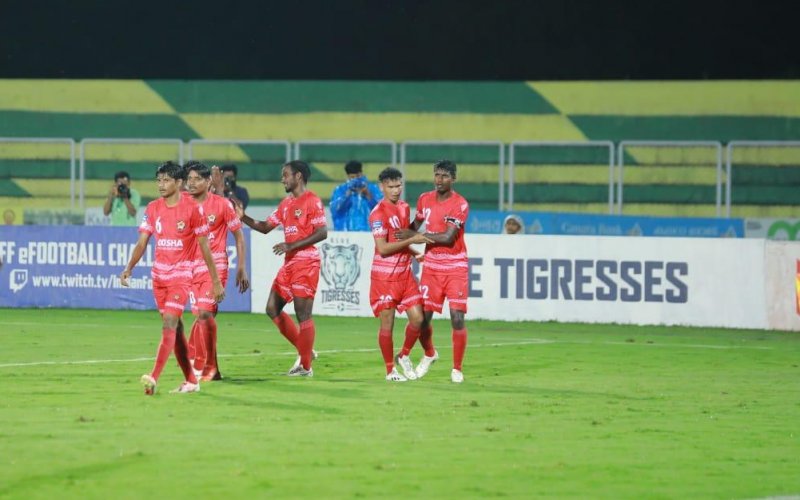 Two late goals from Odisha was enough for them to get a win in Group B as they beat Gujarat 3-2 in the Hero 75th National Football Championship for Santosh Trophy at the Manjeri Payyanad Stadium here on Saturday.

On a rain soaked evening both teams displayed remarkable skill and patience to strive and play passing football. Odisha were the orchestrators for most of it. Right from the off their wingers put Gujarat under constant pressure. They dominated the possession, continuously switching play and keeping their opponents guessing.

In the fourth minute, SK Farid took a shot from distance, chancing his luck, having seen the Gujarat goalkeeper off his line. His shot sailed wide. Within minutes though came a better opportunity. Some brilliant interlinked play between Farid and Jamie Oram saw the latter released into space on the right of the box. The winger delayed his cross perfectly, before driving it low toward the centre towards Kartik Hantal. Instead of choosing to tap it in cleanly, or even take a touch and set himself up, Hantal tried a cheeky flick, which weakly drifted out of touch.

Odisha kept the pressure up, Gujarat dropping deeper within their own area, Jay Kanani often isolated high. The pressure also frayed tempers as Rudrarajsinh Jadeja picked up a yellow card for a bad challenge near the centre circle. In the 15th minute, Hantal was guilty of another miss yards from goal, and within seconds, Pravin Tigga, played through by Chandra Muduli’s delicate chip did the same, shooting wide when clear towards goal.

The rain and the misses took their toll as Gujarat pressed back cautiously, using the long ball to great effect when launching counters. Odisha’s defence were being kept on their toes.

In the 37th finally, the deadlock was broken. Odisha had maintained possession through the half and off a corner, Siddharth Nair botched his clearing header straight into the path of Chandra Muduli right in the centre of goal. Muduli was placed perfectly but still had a lot to do. The ball had bounced up awkwardly and the midfielder showed great technique to whip it into the left corner of the net on the volley. His team had a deserved lead.

Odisha and Muduli had multiple opportunities soon after to double their tally, but the midfielder was guilty of shooting wide. The teams went into the break separated by that single goal. 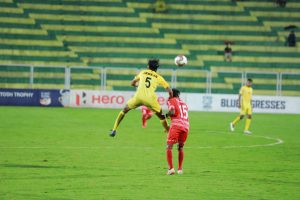 Gujarat came into the second half with more desire and verve, seizing possession, putting their opponents under pressure and constantly moving the ball around. Their passing in the final third though, let them down. The closest they came in their period of dominance was in the 49th minute, when Nair let fly from 40 yards out, only for the ball to bounce awkwardly and skid off the wet surface. SK Kamaluddin was scrambling to try and save and was grateful to see it drift wide.

The game soon descended into a pattern where Odisha kept Gujarat at an arm’s distance without actually doing much of the ball when they had it. It was a dangerous ploy, and they soon paid for it.

When Gujarat did score the equaliser it came off a half chance like no other. A long ball was half cleared by Prabin Tigga, only to fall into the path of Mohmadmaruf Ismail Mulla. The forward delicately chested it down into the path of Prabaldeep Khare, who hit a first-time sliced volley into the far corner, perfect and out of Kamaluddin’s reach. Gujarat were level.

After Manipur’s qualification, a draw here would set the final round of fixtures up perfectly, with all teams in the group in with a chance to make it to the semi finals. Odisha had beaten the group leaders, but seemed to be throwing it away right when it mattered. 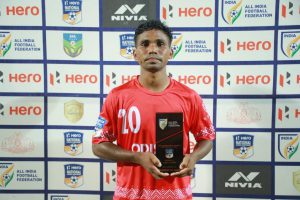 Most games at the tournament though have been decided in the final stages, especially those at the Manjeri Payyanad and so it was here. In the 87th minute, Tigga’s chipped ball forward was gathered by Arapan Lakra inside the box. The pass and the movement had forced Ajmal Eranjhikkal way off his line. The goalkeeper chased the midfielder down. Lakra kept his cool though, dragged the ball wide and crossed towards the centre. A charging Muduli met it to head it into an empty net. They had the lead again.

A minute later, Odisha wrapped the game up, Hantal putting Raisen Tudu through on goal. The forward instead of running the distance unleashed a perfect shot into the bottom corner to take them 3-1 up.

Gujarat won a penalty in injury time, after a needless Odisha challenge on Khare inside the box. Jay Kanani displayed calm beyond his young years to score and reduce the deficit. The kick though was the last of the game and Odisha is still alive in the Group B for giving tough fight for the second spot.