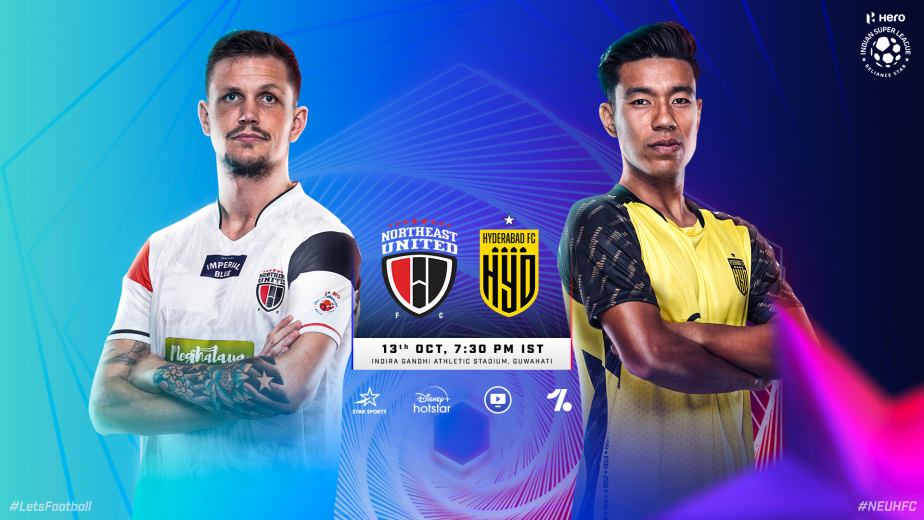 After a narrow loss in Bengaluru in the Matchweek 1 of the Hero Indian Super League (ISL), NorthEast United FC are back in their own backyard to host Hyderabad FC at the Indira Gandhi Athletic Stadium, Guwahati, on Thursday.

The defending champions are coming into the game after a 3-3 draw against Mumbai City FC in Matchweek 1.

In the last Hero ISL season, The Highlanders were vulnerable in the final quarter of the match, which is a concern that has made its way into this season after Bengaluru FC’s 87th-minute winner in the previous game. Since the start of last season, NorthEast United FC have conceded 12 goals in the last quarter of the game, which is more than any other side in the ISL.

On the bright side, new signing Romain Phillipoteaux was impressive during the last outing. The French midfielder created two chances and attempted six crosses, both of which were the highest amongst his teammates.

“Hyderabad are champions for a reason. They are a good team and have already shown that in the game against Mumbai. For us, it’s a challenge but it’s one we are looking forward to,” NorthEast United FC Assistant Coach Paul Groves said. “Our focus will be on ourselves and how we play. We must try to nullify, as best we can, the best team in the league. We’re looking forward to it.”

Just like NorthEast United, Hyderabad FC also felt the effects of conceding a late goal. However, they managed to walk away with a point after that. Hyderabad FC will be a threat down the flanks with Halicharan Narzary and Mohammed Yasir. The duo even combined well for one of the goals against Mumbai City FC. Skipper Joao Victor played the full 90 minutes in that game and bagged a crucial brace.

“I think we are eleven teams in a competition where every team can beat the other. We are happy we won the last edition, but now it’s a completely different situation,” Hyderabad FC head coach Manolo Marquez said. “I know they [NEUFC] started their pre-season late. They also played with a B-Team in the Durand Cup. The other day, against Bengaluru, I think they didn’t deserve to lose the game,” he added.

In the last five encounters between these two sides, Hyderabad FC have scored a total of 19 goals. NorthEast United, on the other hand, have managed to score four. Last season, Hyderabad scored five goals in the two encounters against The Highlanders.