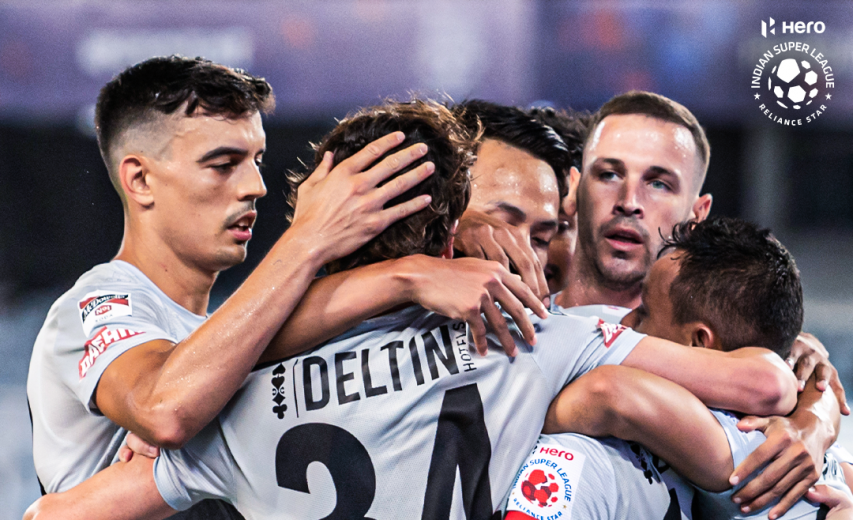 FC Goa started their season with a last-gasp win over East Bengal FC in the Hero Indian Super League (ISL) at the Vivekananda Yuba Bharati Krirangan in Kolkata.

Brandon Fernandes put the Gaurs ahead inside the opening ten minutes, and Cleiton Silva equalised for the Torch Bearers from the penalty spot before Edu Bedia’s long-range free-kick made it 2-1 in the 94th minute.

FC Goa propelled themselves into the lead via Brandon Fernandes. The 28-year-old midfielder was picked out from the left flank by Alvaro Vazquez before he dodged Ivan Gonzalez’s challenge and dinked it over Kamaljit Singh to give FC Goa the lead, seven minutes into the match.

In the 24th minute, Jordan O’Doherty and Cleiton Silva launched a counter-attack. O’Doherty played the ball in behind Silva but the striker could not get a shot away. At the half-hour mark, East Bengal appealed for a penalty, but a freekick was awarded at the edge of the box instead. Silva’s strike from the set piece was punched clear by Dheeraj Moirangthem.

Five minutes from half-time, a long ball from the defensive third was played towards Vazquez. The Spaniard brought the ball down with an exquisite touch and then unleashed a shot on target that was palmed away for a corner. Edu Bedia whipped the ball in from the resulting corner and Anwar Ali’s header was only just wide.

The Torch Bearers came out on the front foot in the second half, applying early pressure, and pushing the Gaurs into their own half. In the 57th minute, Suhair Vadakkepeedika sprinted down the right flank and picked out Alex Lima near the edge of the box. The Brazilian took a couple of touches before firing his shot over the bar

The East Bengal pressure paid off minutes after the hour-mark. Vadakkepeedika skipped the offside trap and reached the ball before Moirangthem and was taken down by the keeper. The referee instantaneously pointed to the spot. Silva stepped up to take the spot kick, sent Moirangthem the wrong way and levelled the score in the 64th minute.

In the fourth minute of second-half stoppage time, FC Goa won a free kick in the East Bengal half, near the halfway line. The Gaurs swarmed forward for it as Edu Bedia whipped in a deep ball into the box. The ball bounced awkwardly in front of the keeper and sneaked into the back of the net without getting a touch off of any player.

Edu Bedia claimed the goal as FC Goa ended their six-game winless run at the Vivekananda Yuba Bharati Krirangan Stadium. The Gaurs will make a trip to the southeast coast to face Chennaiyin FC in their next match on Friday, October 21. East Bengal will travel to Guwahati next to face NorthEast United FC the day before that.