Nikhil Mali: ‘The journey has just begun and I still have a lot to achieve’ 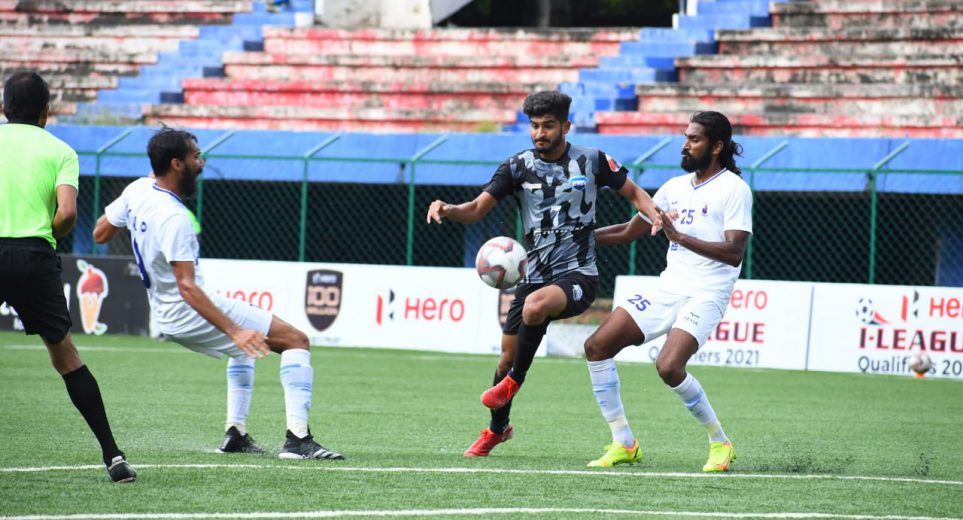 From winning the Delhi Super division to being awarded the MVP in AIFF Futsal Championship, from playing in a state league to now playing in the I-League, Pune-born Nikhil Mali has been one of the success stories of 2021.

Known for his speed and finesse, Nikhil, a product of the now-defunct DSK-Liverpool Academy in Pune, is currently plying his trade for former I-League Champions, Aizawl FC.

Nikhil first started playing football for his school’s under-16 team. After schooling, he gave a trial at the DSK-Liverpool Academy. He was selected for their first batch and went on to play in the Hero Elite League. While completing his studies he played for Chetak FC and GOG Club in the Pune Super Division League and also represented his university team.

During this time, he was introduced to futsal and went to Mumbai to play futsal. He played for Kalina Rangers and represented India in the F5WC 2020 tournament in South Africa. Later in 2020, he participated in the open trials at Minerva and signed for them. As a Minervan, he finished runner-up in the 2020 Himachal Football League with TECHTRO Swades United. He was then loaned to Delhi FC and won the Delhi Super Division twice in two seasons. He also played in the I-League qualifiers with the club and finished third. Most recently, Nikhil won the Hero Futsal Club Championship with DFC and was the MVP of the tournament. The midfielder has now joined Aizawl on loan for the 2021-22 season and is focused on winning the I league title. 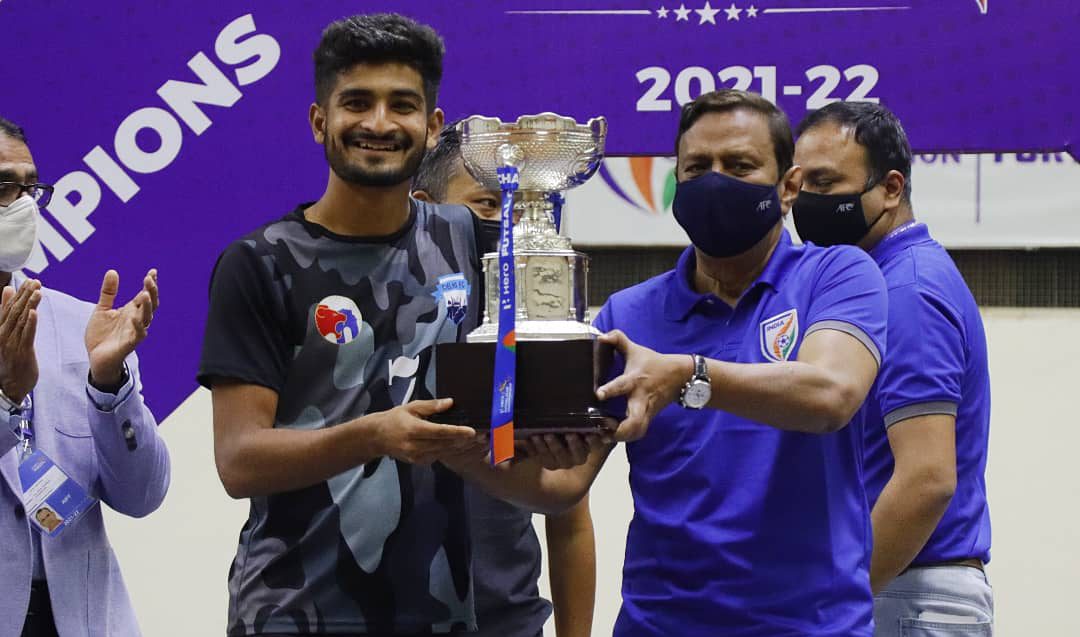 Nikhil talked a lot about his childhood coach Paresh Shivalkar and thanked him for always motivating him and said, “Paresh sir is the one who told me about Minerva and recommended me to Coach Sachin Badadhe (former head coach of Minerva Punjab FC) for Minerva’s open trials. I did well and got selected. From there my professional journey began”.

Mr. Shivalkar, who has played for I-League clubs like Mahindra United, Air India, Churchill Brothers, and Pune FC, shared his first reaction on seeing Nikhil, “When I first saw Nikhil, I was mesmerized. I was amazed by his skill and his talent and I thought he would be very successful”. The Legend of Pune Football further added, “Nikhil always had an eagerness to learn, he asked me several times to help him become a professional footballer. I told him to be dedicated and disciplined and continue training. All credit goes to Nikhil for working hard and I hope to see him with the national team soon”, concluded a very optimistic former Pune FC winger.

Talking about managing Futsal and Football, Nikhil told, “Futsal helps me in my decision making, improving my awareness and skills, and also, I find no difficulty in switching from one to the other. Nowadays many players play small-sided games and this helps them with their touch, their skills and also improves their technical abilities”. Nikhil feels the need for more clubs with a proper professional setup and believes that more clubs should invest in grassroots and youth development so that players can showcase their talents.

Nikhil admitted that he struggled a bit when he started his life at Minerva but his determination kept him going. Heaping praise on Minerva’s facility Nikhil said, “The infrastructure is top-notch. Minerva has its gym, dietitian, in-house physiotherapist, and rehab facilities. Everything they have, they have it all inside their campus. In Minerva, players get to play a lot of matches which helps in boosting their confidence.” 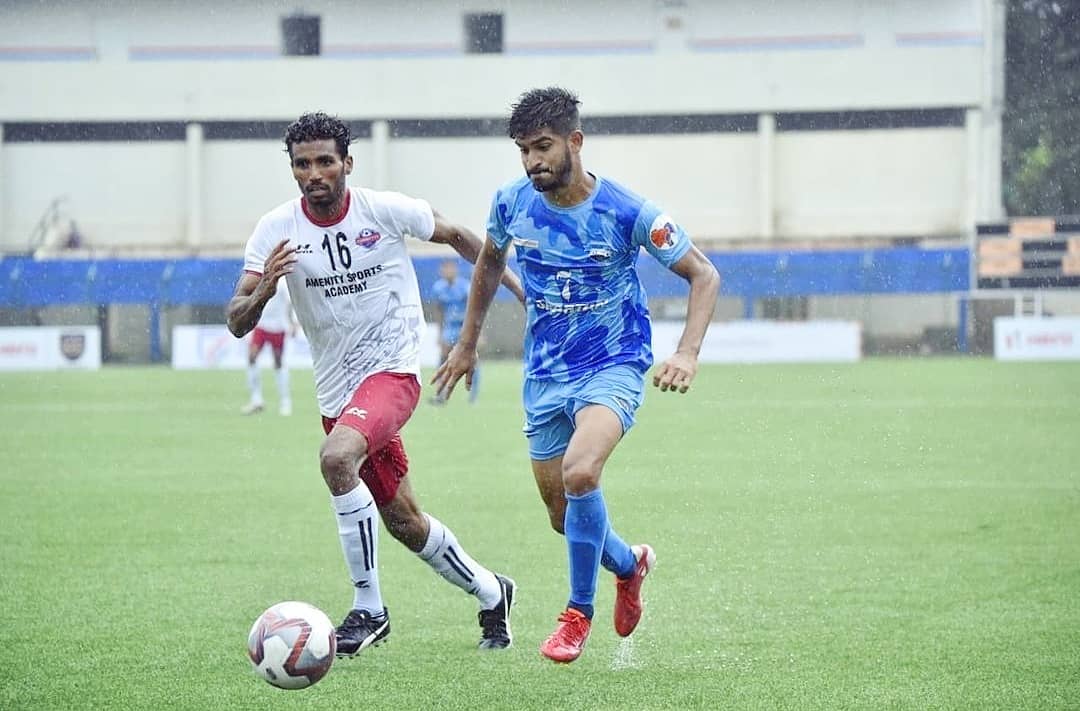 Nikhil recalled his glory days as a Minervan and explained how his team turned heartbreak into triumph, “I think we did well in the Hero I-League Qualifiers but the last-minute goal from Rajasthan United shattered our dreams. But we learned a lot from it and dominated every game to win the Hero Futsal Club Championship”. Nikhil also shared his appreciation for his former boss and owner of Minerva Academy FC, Mr. Ranjit Bajaj, stating, “He is a very passionate person. He inspires the players to do their best and lets them express themselves freely. This gives confidence to the players. He was my mentor, he guided me and helped me a lot and I am sure he will continue to do the same”.

Nikhil idolizes Indian national team captain Sunil Chhetri and said that he has dreamed of playing along with him. When asked about taking his place, Nikhil laughed and said, “I don’t know. He has achieved many things which are difficult for anyone to match in the near future.”

Last year was great for Nikhil. Within a year, he moved from a State League to the I-League, which is a big deal for him and his family. Nikhil admitted that he has to stay grounded. “The journey has just begun and I still have a lot to achieve”. Nikhil appreciated his parents’ support and said, “When they came to know that I was going to play for Aizawl, they were overjoyed and proud of me. They have always supported me and always believed in me.”

This season with Aizawl, Nikhil is aiming to do well and win the league for the fans. “In the future, I would also like to sign for an ISL club and I want to represent my country and become a regular”, an optimistic Nikhil stated when asked about his future ambition.

“Keep working hard. Give everything you got. Be disciplined and keep motivating yourself. Always put in the extra effort and always be ready to learn new things. Opportunity doesn’t tell you when it will come, it will come and you have to be ready for it to prove yourself”, Nikhil concluded the interview with a message for the budding footballers.