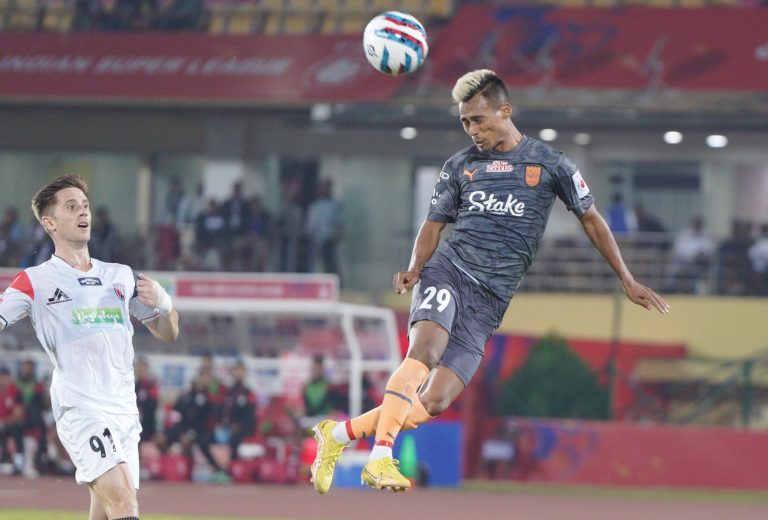 Mumbai City FC went to the top of the table after a comfortable 3-1 win over NorthEast United FC in the Hero Indian Super League (ISL) at the Indira Gandhi Athletic Stadium in Guwahati on Friday.

Ahmed Jahouh, Bipin Singh, and Jorge Diaz got their names on the scoresheet for the Islanders, while Parthib Gogoi scored his first goal for NorthEast United FC. New signing Wilmar Jordan came on to make his debut for the Highlanders in the 57th minute but they were already 3-1 down and the striker couldn’t assert his presence in the game.

The hosts switched their formation to a 4-3-3 and made just one change as Rochharzela came in to replace Emil Benny. The visitors also made one change that saw Lalengmawia Ralte drop to the bench as Vinit Rai took his spot in the midfield.

A penalty was awarded to Mumbai City FC in the 10th minute after Greg Stewart was clipped by Rochharzela just outside the box. The referee pointed to the spot, and Jahouh smashed it in to put the Islanders in front.

The lead did not last for a long time as a sloppy pass from Mehtab Singh went straight to Romain Philippoteaux. The Frenchman instantly put Gogoi through on goal before the youngster kept his composure and put away the leveller with aplomb in the 17th minute.

In the 28th minute, the Islanders were back in front. Stewart was the architect again as he whipped in a ball into the box from the right flank. The ball found its way to Bipin, who headed it in at the far post to restore Mumbai City FC’s advantage.

Thirty seconds into the second half, a two-goal cushion was established. Bipin went down the left side and got his shot away. The effort was parried by Mirshad Michu, but Diaz was in the right place at the right time to score for the Islanders.

In the final quarter of the game, a plethora of opportunities fell to Mumbai City FC, but they could not add another goal to their tally. The Islanders attempted a total of 22 shots in the game, out of which 13 were on target.

The win takes Mumbai City FC to the top of the Hero ISL table, two points clear of Hyderabad FC who play ATKMB on Saturday. The Islanders will return home to face FC Goa on December 1, Thursday. NorthEast United FC stay rooted to the bottom of the table without a single point after seven games. The Highlanders will travel to Bhubaneswar next to take on Odisha FC on December 2.

Key Stats:
– Greg Stewart kept 6 of his 8 shots on target and finished with 2 assists
– Mirshad Michu faced 13 shots and produced 10 saves in the match
– Ahmed Jahouh completed 84/101 passes, finishing with a pass accuracy of 83%

“FCBU has created great infrastructure for Bangalore players to shine” say Manoj and Srijith
“It has been like a lifeline,” say FC Goa fans as they relish the local connect being back at the stadium