Manipur edge out Gujarat to take control of Group B 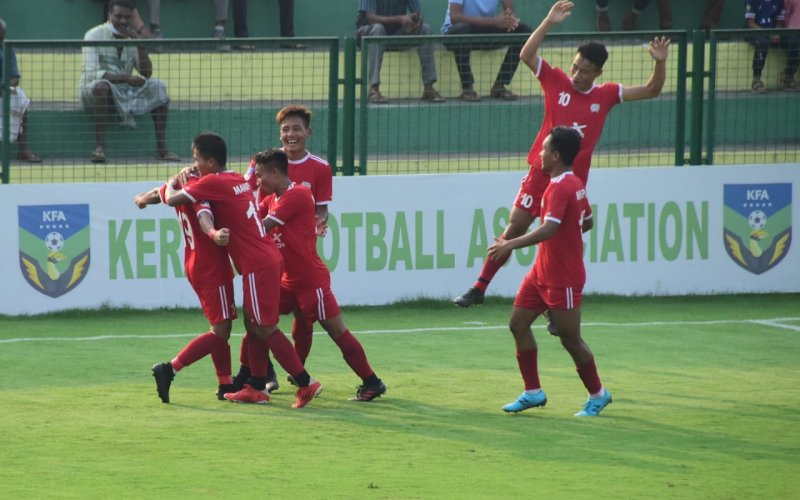 Manipur beat Gujarat 2-0 in a Group B encounter at the Hero 75th National Football Championship for the Santosh Trophy today. Manipur, having shocked Services, had lost to Odisha in their previous encounter. They rebounded from that setback to set the group up perfectly for a grand finale in pursuit of the semis.

In a tightly contested first half, chances were few and far between, both teams unable to find their way in the final third. Manipur after shocking the defending champions had suffered a setback with a loss to Odisha, set the tone for the game. Right from the opening whistle they dominated the ball, stringing together neat passes in midfield to move the ball ahead. In the second minute, their slick play yielded the first of many half chances, Ngulgoulal Singsit curling a brilliant cross into the box that evaded everyone,drifting safely wide.

Manipur’s right side was particularly productive, Singsit and Somishon Shirak the protagonists of an unproductive half, both constantly dropping dangerous balls into the area but unable to find the one that would break the deadlock.

While both teams were coming off a loss, it was Gujarat who had come out of theirs with more acclaim, losing to the defending champions after going up by a goal. Even here, despite being strangled out of possession they were attentive to the counter, and were the ones who created the first real chance of the game. In the 15th minute, captain Brajesh Yadav threaded through a brilliant ball to Jay Kanani up front. The youngster ran free of his marker and was through on goal, only for his first touch to betray him. It was enough for an onrushing Md Abujar to parry. The goalkeeper’s rebound fell kindly to Mohmadmaruf Ismail Mulla, but from a tight angle, crowded by bodies the forward shot wide and Manipur had escaped. 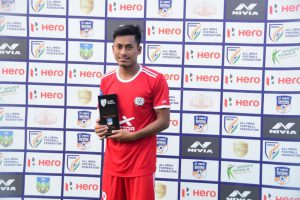 Manipur paid heed to the counter-attacking threat and were keen to not lose possession within their own half. Singsit’s guile kept them in contention for the opener. And Gujarat of course had their own demons to battle. In the 19th minute, Muhammed Sagar Ali delayed playing the ball out from the back just a fraction too long, and was hustled out of possession by Singsit. This time though the midfielder decided to shoot rather than pass, and shot clean on goal albeit from a tight angle. Ajmla Eranjhikkal dived low to palm it out and keep Gujarat level.

It remained the best chance anyone had to break the deadlock as the teams headed into halftime.

Manipur started the second half much like they ended the first, hogging the possession and passing neatly in midfield. In the 48th minute, Jenish Singh played Sudhir Laitonjam through into the box on the right. The winger was perfectly placed to deliver a cross for his forwards crowding the box. Instead he chose to shoot, from a tight angle on goal. It required a shot of extreme quality to score, and his was still rising as it hit the top corner of the net. Manipur, finally, had the lead.

From thereon Manipur took complete control of the game, intent on ensuring they got all three points. They kept the pressure constantly on Gujarat, shifting flanks, and creating chances at regular intervals. In the 67th minute, the pressure told, albeit in the most extraordinary way. An innocuous cross was cleared away by Gujarat’s defence only to fall on the head of Shirak on the edge of the box. The forward headed the ball back into the box to no one in particular. Siddharth Nair messed up a routine clearance to instead volley the ball into his own goal and give Manipur a two goal advantage.

Gift Raikhan used that half chance to impress upon his players the necessity for control. Manipur had played just well enough to deserve the points, but even then Gujarat were not prepared to go away easily. In the dying moments, from range, Nair, Avi Amin and Kanani had shots at goal, each missing by narrow margins as Manipur held on for the win. Gujarat, despite two brave and creditable performances were left with no points to show for it.