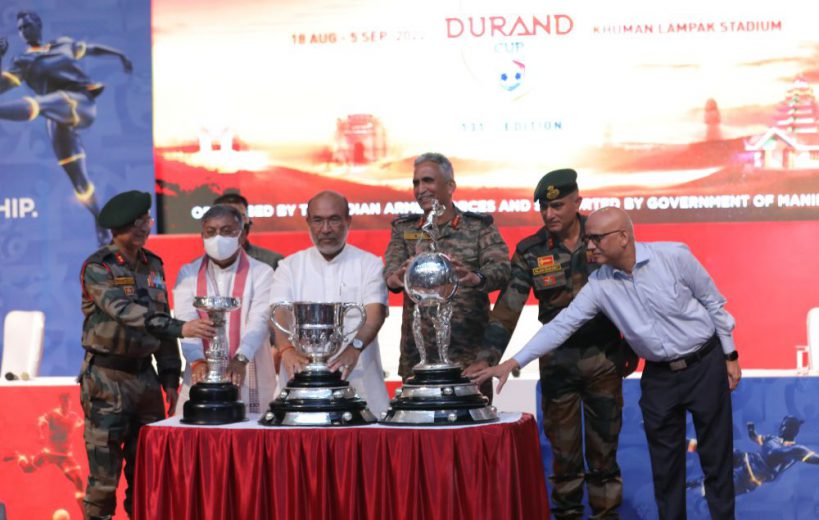 The iconic Durand Cup trophies were flagged-off from Kolkata on July 19th and reached Guwahati in Assam on July 21st. After their tour of Manipur, they proceed to Jaipur, Delhi and Goa, before returning to Kolkata, where the Grand Finale is scheduled for September 18, 2022, at the hallowed Vivekananda Yuba Bharati Krirangan (VYBK), also popularly referred to as the Saltlake stadium in local parlance. The storied tournament, organized by the Indian Army is being supported by the Government of Manipur.

Addressing the congregation, Biren Singh, said, “It’s a matter of great pride and privilege for me to be associated with this tournament. In 1981, I was part of the winning BSF team.”

“At first, I was tense that Manipur would not be able to host the tournament due to lack of infrastructure, but now I am sure that we’ll meet all the requirements and I can assure you that the Durand Cup, which is very close to my heart, will be held here successfully in the future as well. We will make it bigger and better,” the CM said.

Also sharing his thoughts on the occasion Lt Gen Repswal, SM, VSM, Chief of Staff, Eastern Command and Chairman Durand Organising Committee, said, “It is wonderful to be in Manipur, a state that has contributed so much to Indian football. It is no surprise to all of us that the Hon’ble Chief Minister Shri Biren Singh himself is a past football professional and we are honoured by his presence here today on this historic occasion. The cooperation from the Manipur Government has been hugely encouraging and exceptional. The support has been overwhelming and has further boosted our spirits in our endeavor to promote and spread the spirit of Durand further East.”

The three trophies, the Durand Cup (a rolling trophy and the original prize), the Shimla Trophy (also a rolling trophy and first given by the residents of Shimla in 1904) and the President’s Cup (for permanent keep and first presented by Dr. Rajendra Prasad, India’s first President, in 1956) post the unveiling, were taken to the historic Imphal Polo ground where the game of Polo first originated, escorted by a spectacular 100 bikes rally. From there it proceeded to Leimakhong.

The Durand Cup will be bigger and better this year with 20-top teams of the country, including all 11 teams from the top division Indian Super League (ISL) participating. This is up from 16-teams last year.

There will be a total of 47 games in the 131st Durand Cup edition, with both Guwahati and Imphal hosting 10-games of group C and group D each. All seven knockout games will be held in three venues in West Bengal. The opening pool matches are slated to begin on August 16th at Kolkata’s VYBK, on August 17th at Guwahati’s Indira Gandhi Athletic stadium and August 18th at the Khuman Lampakh stadium with the nationaly popular local derby between Neroca FC and TRAU FC.

For the latest news and information about The Durand Cup please visit our website www.durandcup.in