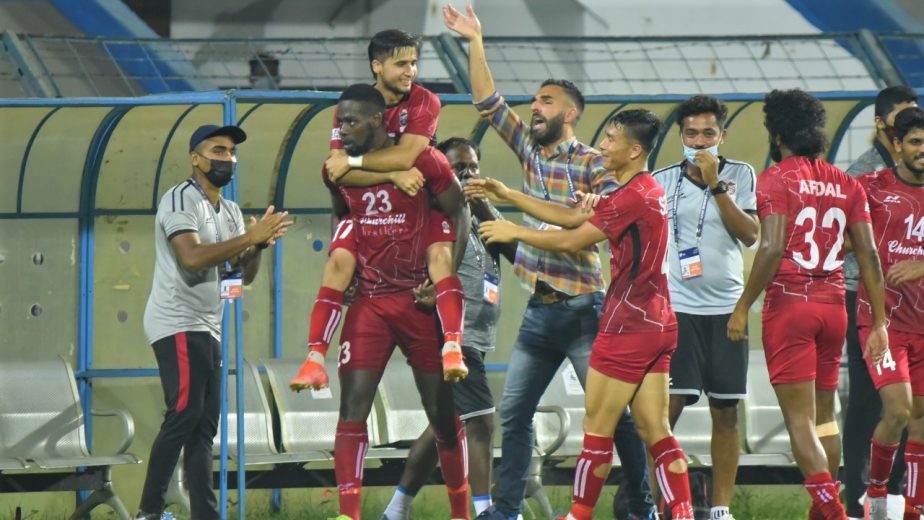 Momo Cisse’s last minute goal helped Churchill Brothers pip Indian Arrows 2-1, here at the Kalyani Stadium. Arrows took the lead at the end of the first half thanks to Brijesh Giri but Churchill bounced back in the second half, scoring a goal right after half time, courtesy of Komron Tursunov and just before full-time when Momo Cisse smashed a free-kick into the net.

The Arrows got off to a good start as Parthib Gogoi sprinted into the box with the ball only to be halted by Cisse. At the other end, Gnohere Krizo used his physique to make his way past the Arrows defence but eventually the effort was thwarted. The pace of a young Indian Arrows side caused a few problems for Churchill Brothers.

Inside the first ten minutes, the Arrows had the Churchill Brothers defence worried on numerous occasions. After being blocked in his first attempt, Gogoi rattled the crossbar with his second effort. However, even if the shot was on target, it would not have counted as the flag was up against the young striker for offside.

Vibin Mohanan got in on the act as he dribbled down the left flank and cleverly got past Lamgoulen before passing it through to Brijesh Giri. The makeshift left-midfielder carried it forward but ran out of room before he could turn it into something for the Arrows. Later on, a few more crosses came in from the flanks but did not find their way past the Churchill defence.

The front-three of Churchill Brothers were trying to link up but poor passing let them down. Krizo did attempt a no-look half-volley with his back to goal but it was wayward. Minutes later, Tursunov picked put Krizo out in the box and the Ivorian controlled it on his chest before Arrows keeper Zahid Bukhari palmed it away bravely. After the clearance, the referee blew his whistle for a foul in that chaos.

After a series of Churchill Brothers’ attacks, in the final minute of first-half stoppage time, Indian Arrows broke the deadlock courtesy of Brijesh Giri. The initial shot came from Gogoi and it was palmed away by Shilton Paul but straight into the path of Giri who made no mistake and smashed the ball in to give his side the lead at half time.

The joy didn’t last long as on the other side of the break, Churchill drew level after Tursunov struck the equaliser in after a superb counter-attack. The striker was found brilliantly by Ngwoke’s perfectly weighted pass. Churchill Brothers gained momentum with the equaliser as they swarmed forward with the intention of bagging a winner.

Things were looking promising for the side in red. However, just before the hour mark, midfielder Saurav Mandal was shown a straight red card for an off-the-ball incident. Tempers flared but the decision stood and Churchill Brothers were down to ten men. But the winning intent was evident again as Lamgoulen retained the ball, sprinted forward and passed it to Ngwoke. The striker tried to play it through to Krizo but the pass was intercepted.

Due to the red card, Ngwoke was taken off and replaced by Bryce Miranda. After an unfortunate injury to Tankadhar Bag, Leewan Castanha came on to replace him. Castanha made his presence felt as he whipped in an excellent low cross from the right which was met by an equally excellent clearance from Momo Cisse.

Towards the end of the game, it was end-to-end football with both sides swarming forward in search of a winner. Komron came the closest as he received the ball inside the box and saw his left-footed strike rattle the crossbar. Shortly after that, Arrows substitute Himanshu Jangra buried the ball in the back of the net only to see his goal disallowed because of an offside flag.

It all came down to the last minute when Churchill Brothers won a free-kick on the edge of the penalty area. Cisse stood over the free-kick after convincing Komron that he would take it and he blasted it home to give his side the lead, the win, and all three points on the night.

This crucial victory for Churchill Brothers lifts them up into fifth on the table. A disappointing result for Indian Arrows ensures they stay 11th, two points clear of Sudeva Delhi, who have a game in hand.