Kerala’s winning streak was brought to a standing halt by a superb Meghalaya side in the Hero 75th National Football Championship for the Santosh Trophy at the Manjeri Payyanad Stadium on Wednesday. The two teams played out a highly entertaining 2-2 draw that underlined the close nature of this tournament, where the favourites looked their most vulnerable yet.

Much like in their previous encounter, Kerala were slow off the blocks. Within three minutes, Meghalaya had racked up five corners, although they conjured little of note from them. Nonetheless, the signs were there, Meghalaya weren’t there to take part, they were keen to take over.

Kerala slowly found their momentum, captain Jijo Joseph and Arjun Jayaraj orchestrating the midfield as they took control of possession. They toyed with Meghalaya’s patience, often happy just to draw their numbers out of a packed defence in order to find space for a through ball. In the eleventh, came the first of many, M Viknesh’s first time chip pass splitting the Meghalaya centre backs to allow Jayaraj with a free run on goal. His shot was harried because of an onrushing Frolicson Dkhar and the goalkeeper did enough to concede a corner and avoid more damage. From the corner came another moment that was almost magic. The youngster Muhammed Saheef picked up a half cleared ball on the edge of the area, turned his marker inside out and unleashed a left footed curler towards goal, albeit a few metres wide.

Kerala were getting closer and the crowd fed off the tension, urging every Kerala player towards the attack. In the 17th minute, they finally had the breakthrough, courtesy a moment of pure genius from Nijo Gilbert. Released into the box by Soyal Joshy on the right, Nijo’s first two touches took Henryford Nongneng and Saveme Tariang out of the picture, the former left on the grass after a superb fake. Calmly, Nijo crossed the ball into the six yard box, where amid a rush of bodies, Muhammed Safnad tapped it in to spark pandemonium in the stands.

The goal was the confidence booster Kerala needed, and a few minutes later they had bulged the net again. Some superb combination play between Jijo and Soyal saw the latter cross perfectly for Viknesh to tap in from five yards out. However, the striker was ruled offside.

With Kerala completely dominant, Meghalaya needed to reset. Coach Bobby Lyngdoh had seen enough with half an hour gone and initiated the first substitution, Sangti Janai coming on for Raikut Shisha Buam. The youngster immediately injected pace on the flanks, and an inert Meghalaya were suddenly dangerous on every counter attack. It took some last ditch defending from Soyal to ensure Kerala stayed in the lead, as Sangti ran riot on the right flank.

Soon after, Meghalaya were level. After some intricate passing on the flanks, Atlanson Kharma dropped a cross towards the far post, inside the six yard area, and Kynsaibor Lhuid slotted the ball into the net from three yards out. The stadium was stunned, but in fairness it had been coming. Despite their dominant displays, Kerala’s defence had often been guilty of going to sleep and on this occasion they were made to pay. The teams went into halftime level at a goal apiece. 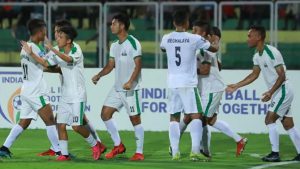 Perhaps shocked at having conceded a goal for the first time in the tournament, or provoked by the danger Meghalaya’s pacey wingers displayed, Bino George’s halftime substitutions echoed those he made in the previous game, as TK Jesin and PN Noufal came on for the goalscorer and the creator. Almost immediately, Jesin’s intricate footwork and skill on the ball posed problems for Meghalaya. First, after exchanging passes with Muhammed Rashid he crossed the ball to the far post, just beyond the outstretched boot of Noufal. In the 50th minute, it was similar footwork that took him into the box, provoking a foul inside the box. The referee pointed to the spot and Kerala had a chance to restore their lead. Up stepped their captain Jijo, who had already score three and assisted two in the tournament. From the penalty though he blasted high and wide.

Again, Meghalaya took heart from their slice of luck, hitting Kerala with accurate and quick counters. With each attack they looked destined to score and drop the stadium into silence. In the 55th minute, they did. A well worked corner was played to the far post, where Wilbert Donboklang nodded it square for Figo to head into an empty net. Meghalaya had a shock lead.

Three minutes was all it lasted though. A flat, zipping Arjun Jayaraj freekick from the left was astonishingly allowed to travel the length of the box, to the far post, where Muhammed Saheef gratefully took a first time tap in to equalise.

From thereon, it became a battle of attrition, two teams slugging like boxers on the ropes. Kerala held the possession, patiently building up an attack, as Meghalaya looked for swift incisive counters to kill the crowd’s noise for a third time in one evening. Figo, Jijo and Jesin were guilty of misses. The Meghalaya boy guilty of not passing when needed and the home state stars were guilty of perhaps passing too much. 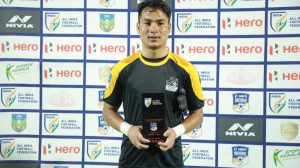 As usual Kerala left some drama for the last. In the final minute of regulation time, Soyal Joshy, Kerala’s standout performer on the evening, drifted into the box and cut back a perfect cross into Jijo’s path. The captain’s first time shot was low, hard and headed towards goal. Frolicson, diving one way, stuck his foot out the other, and miraculously stuck it out just in time to deflect the ball over the bar. It was a world class save at a high pressure moment. It also meant the teams split the points, a fair result that few would contest. The crowd had got the game they deserved if not the result they craved.