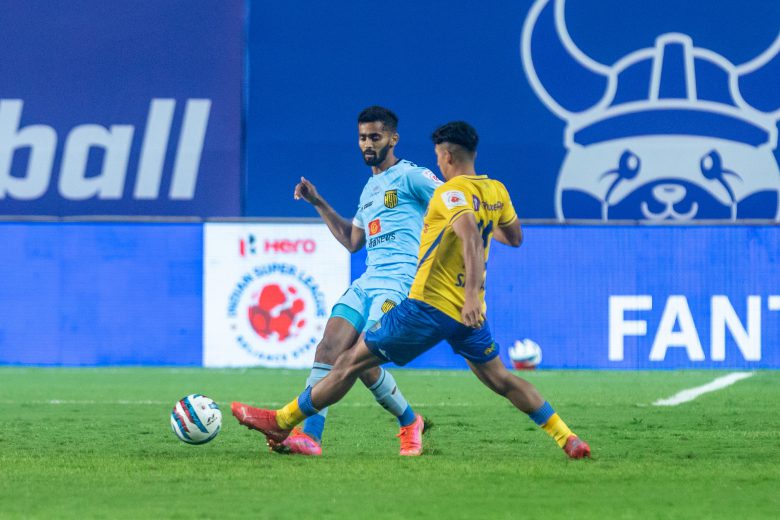 Goa, January 9: Kerala Blasters brought Hyderabad FC’s unbeaten run to an end and jumped to the top of the table with a 1-0 win in the Indian Super League at the Tilak Maidan Stadium on Sunday.

Alvaro Vazquez (42nd) scored a first-half goal which eventually proved to be the winner as Kerala stretched their unbeaten streak to nine games, moving to the top of the points table with a better goal difference than Mumbai City FC, both being on 17 points from 10 games. This was the first time they went top of the Hero ISL table, for the first time since the last seven years.

Hyderabad, on the other hand, saw their eight-game unbeaten run come to an end as they dropped to the third in the table having 16 points from 10 matches.

Hyderabad had a chance to take the lead early on when Edu Garcia’s free-kick was deflected onto the crossbar by Prabhsukhan Gill after the ball was curled expertly over the wall.

Bartholomew Ogbeche was shown his fourth yellow card in the next minute, meaning he will miss the next match.

Kattimani pulled off a brilliant save in the 24th minute to deny Jorge Diaz as Kerala kept knocking on the door.

As the match progressed, both teams tried to carve open a clear-cut chance before Vazquez helped the yellow shirts nose ahead. A long throw-in was met by Sahal Abdul Samad who flicked it behind in the danger area where Vazquez struck a sweet volley to beat the keeper all ends up.

Hyderabad came close through Ogbeche on the cusp of halftime but the Nigerian shot wide. In the second period, Hyderabad tried to up the ante but failed to muster any real opportunity in front of goal barring one where Kerala skipper Jessel Carneiro kept his side in the lead with a goalline clearance.