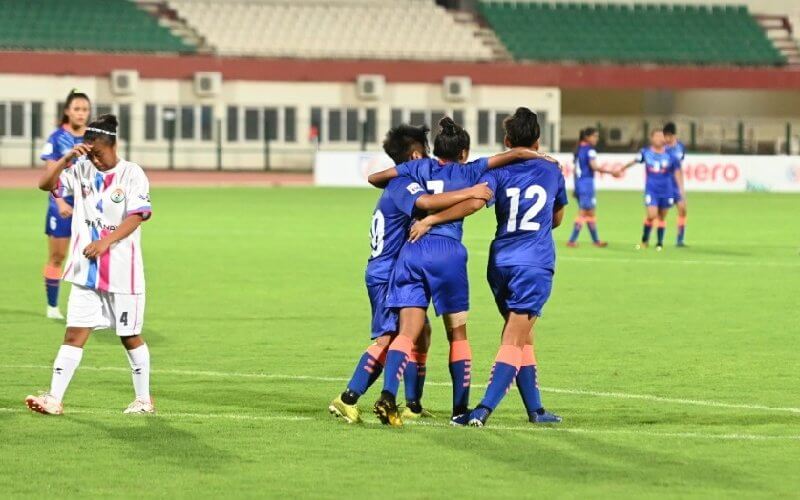 Indian Arrows started their HIWL campaign with complete dominance as they rarely gave Sirvodem SC a chance to play their natural game. The AIFF’s developmental side, which made its Hero IWL debut at the Kalinga Stadium in Bhubaneswar on Friday, April 15, bagged home the full points with a comfortable 4-0 win over Goan side Sirvoderm SC.

The deadlock was broken within seven minutes of the game as Priyangka stunned everyone with a long ranger from the middle of the park, leaving Sirvodem custodian Dhanushree stranded on her feet.

Thereafter, the AIFF’s developmental side stepped up their game with Amisha Baxla’s terrific wing play. The 18-year-old first assisted Narzary’s goal with a sublime cross in the 23rd minute, followed by a goal of her own in the 25th minute.

Sirvoderm were left locked in their own box for major parts of the match, despite having a much more experienced side. The youngsters kept strict eyes on Ghanaian forward Tetteh and left no space for her to create problems.

The Arrows thought they had their first booking of the match around the half hour mark when referee Ranjita Tekcham flashed her at Muskan for a tackle on Tetteh, but the referee later overturned her own decision after discussing with her assistant. The resulting set-piece by Sirvodem was easily dealt with by the Arrows defence.

After the changeover, the Arrows looked to slow the game down, keeping the ball and passing it around the park. However, they did keep probing at Sirvodem’s third of the pitch, with Priyangka and Apurna often being involved in orchestrating the chances.

The midfielder could have had her brace around the hour mark when substitute Aarti, who had replaced Martina, sent in a low, hard cross, that was volleyed perfectly by Priyangka. However, Sirvodem goalkeeper Dhanushree showed cat-like reflexes to parry it away.

Priyangka finally scored her brace in the 82nd minute, when she laced the ball home after a brilliant bit of hold-up play by Apurna. The Arrows notched thus climb to the second spot on the Hero IWL table, behind SSB Women, who had defeated Hans Women FC 6-2 earlier in the day.