India U20 pump 8 goals past Nepal in SAFF Championship 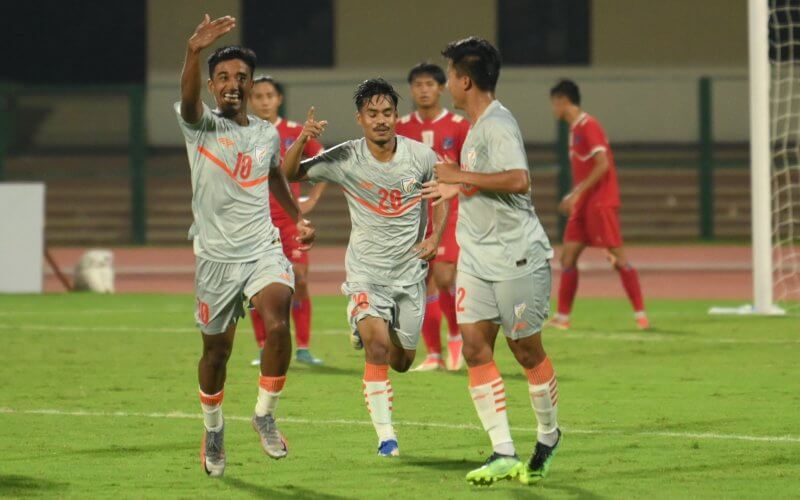 BHUBANESWAR: Extreme perseverance, and an exceptional conversion rate enabled defending champions India U20 register a comprehensive 8-0 victory against Nepal U20 in the ongoing SAFF U20 Championship at the Kalinga Stadium in Bhubaneswar on Sunday (July 31, 2022). The victory took India to 6 points from 3 matches, and they will next play Maldives in their last league match on August 2.

India’s domination and ball possession was complete, and Shanmugam Venkatesh’s boys were quick to interchange, played it in the gaps, and had someone to support each other all throughout.

The first goal was a gift with a smart Taison making the most of it in the 32nd minute. Nepal goalkeeper Ishwor Gurung, much to be credited to deny India till then, failed to collect a routine gathering off Maheson Singh’s cross from the left, and as it fell to Taison lurking around; the latter headed it into an empty net.

The lead was doubled five minutes after the changeover. Jangra, a thorn in the flesh of the rival defence, feinted inside the box and laid it off for Parthib Gogoi, who banged it in.

The third goal, some two minutes later, was a leaf taken out from the textbook. Jangra sent it in between the two defenders, and Parthib following it up delectably, lobbed it over Ishwor for a clinical finish.

Taison scored his second, capitalising on a rebound in the 66th minute, to turn it into the back of the net. Four minutes later, Parthib was brought down inside the box and as the referee pointed to the spot, Jangra gleefully converted it to make it 5-0.

Eight minutes later it was 6-0 – substitute Tankadhar Bag, the local boy in Odisha, tapping in Vibin Mohanan’s cross from the left flank. Substitute Gurkirat made it 7-0 in the 89th minute when he managed to snatch it from the Nepal defence; he got past a couple, cut in, and sent it past Ishwor into the bottom corner.

More was in store, and Shubho Paul completed the rout tapping in a Tankadhar cross from the left in added time.

Also Read Think before you call me old – Sunil Chhetri