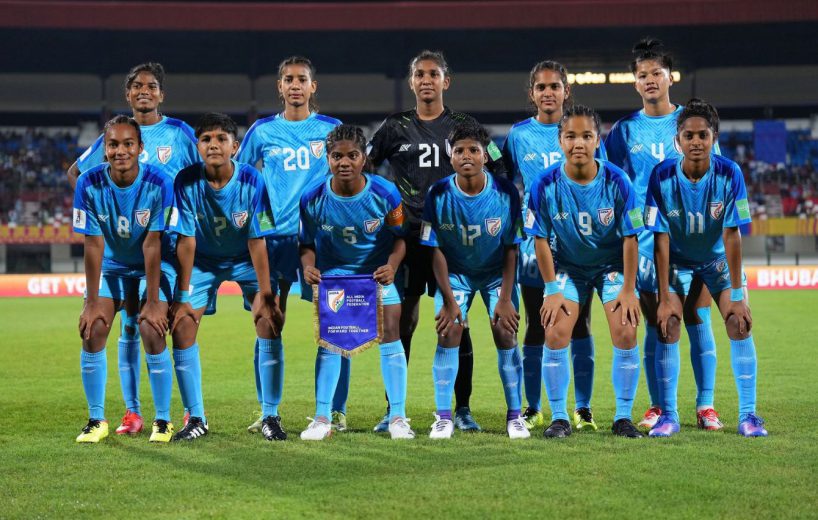 BHUBANESWAR: India U-17 Women’s National Team began their FIFA U-17 Women’s World Cup campaign with a 0-8 defeat at the hands of the mighty USA at the Kalinga Stadium in Bhubaneswar on Tuesday, October 11.

There were seven different goal scorers for USA, who dominated the game from the start, by virtue of their clear physical advantage, which came in handy in the set-piece situations.

The match started with the USA going straight on the attack with India defending resiliently in the first few minutes. India almost got into the USA box in the third minute but the USA defence recovered in time. An attack coming from USA on the left flank was easily collected by India goalkeeper Anjali Munda.

USA mounted the pressure on India, building frequent attacking combinations, and managed to break the deadlock as early as the ninth minute, when captain Riley Jackson delivered a cross from the right-hand side which was finished off by the striker Melina Angelica Rebimbas.

Charlotte Ruth Kohler scored a free header in the 15th minute for USA’s second goal from a corner kick, while Onyeka Paloma Gamero scored the third goal for the visitors following an error in the Indian backline.

Anjali Munda made a decent save in the 28th minute and gathered on her second attempt from a corner kick. India had a chance a few minutes later when Neha tried her luck from long range, but her effort flew past the upright.

Rebimbas, scored her second goal in the 31st through a top-class finish on the half-volley, giving no chance to the Indian goalkeeper. The fifth goal came soon in the 39th when Gisele Thompson scored past Munda’s near post.

The second half started in similar fashion with the USA keeping up the domination. In the 51st minute, Ella Emri scored the sixth goal, again from a corner kick. Eight minutes later, Taylor Marie Suarez converted from the spot to make it 7-0 to USA’s favour.

Mia Elizabeth Bhuta scored a powerful long-ranged shot to score the eighth in the 62nd minute. Later in the game, Indian goalkeeper Munda made some fine saves, limiting the scoreline to eight.

India will now face Morocco, another debutant side in the competition on Friday, October 14, 2022 at Kalinga Stadium in Bhubaneshwar, which kicks off at 8 PM IST.