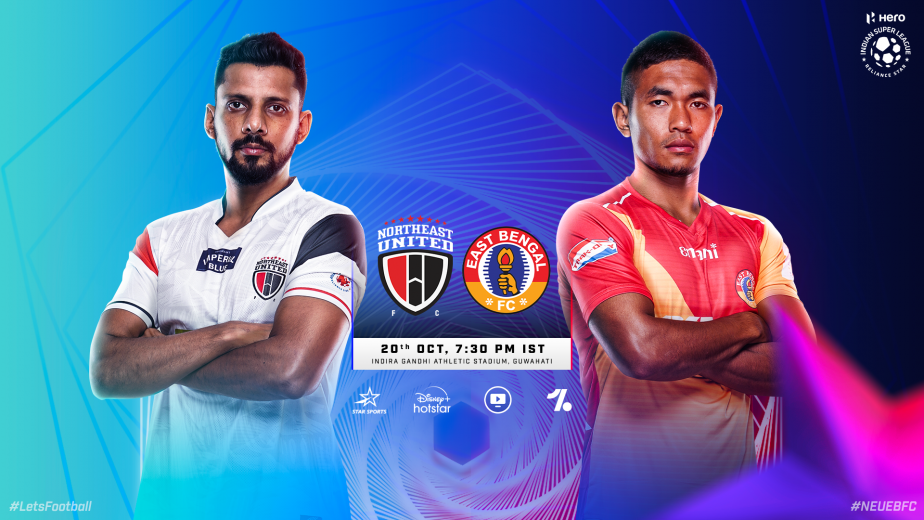 Matchweek 3 of the Hero Indian Super League (ISL) 2022-23 will kick off with NorthEast United FC taking on East Bengal FC on Thursday, October 20, at the Indira Gandhi Athletic Stadium in Guwahati.

Both sides have played two games but are yet to win a point. They currently find themselves at the bottom of the table.

NorthEast United FC sit in last place because of an inferior goal difference to East Bengal FC, but will take inspiration from the fact that the visitors have never beaten them in the Hero ISL.

Their first loss of the season was a tight affair against Bengaluru FC, who scored the only goal of the game in the 87th minute, missing out in the final minutes of the match.

Their loss to Hyderabad FC in Matchweek 2, however, was a fairly one-sided tie, with the defending Hero ISL champions displaying their authority in a 3-0 win. NorthEast United FC are still searching for their first goal of the campaign.

Their Head Coach Marco Balbul, who served a one-match suspension after picking up a red card in the opener, will be back in the dugout for this match. Despite NorthEast United FC’s start to the season, Balbul was fairly optimistic about his team’s chances of winning the game in his pre-match press conference.

“We have a really good team that can win tomorrow. We will come with the right attitude – the right approach. The players have shown me in training that they are concentrating and very committed, and it will be a tough match, but we want three points tomorrow,” he said.

East Bengal FC were beaten 3-1 by Kerala Blasters in their first game of the season. Their second game against FC Goa was a bit closer, where they lost 2-1 after Edu Bedia scored a stoppage-time free-kick. East Bengal FC are yet to score a goal from open play.

East Bengal FC have also collapsed towards the end of games, and Head Coach Stephen Constantine suggested in his pre-match conference that the team needs to start putting two halves together.

“You know, I think we have played well in parts, but now we need to put them all together and be consistent. We are starting to find a rhythm – I see this in training also. In the last couple of days, we have worked very hard on what we need to be doing. So, hopefully on Thursday, we get the positive result,” he said.

The two sides have faced each other four times so far, with NorthEast United FC yet to be on the losing side. Three of the games have ended in victory for the Highlanders, but the last meeting between the two sides, back in February, ended in a draw. The match promises to be quite tense with both teams having a pressing need to get off the mark on the points table.

From the Tasman Sea to the world: Tazuni™ revealed as Official Mascot of the FIFA Women’s World Cup™
Carlos Pena: We respect Chennaiyin FC as opponents, but we don’t fear them