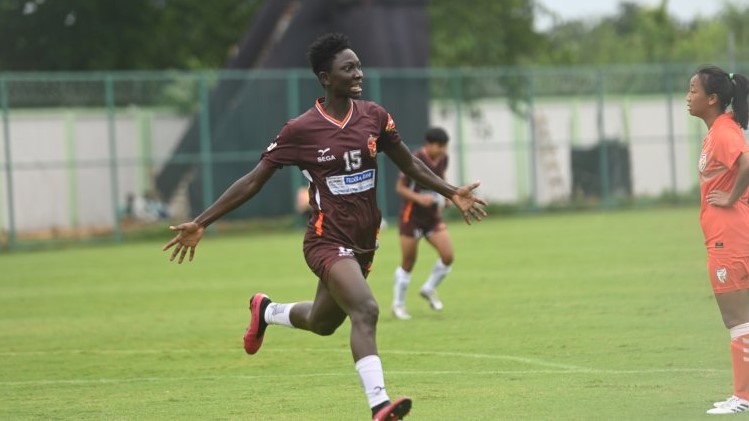 Elshaddai Acheampong, the prolific Ghanaian striker who has taken the Hero Indian Women’s League 2021-22 by storm with her dazzling scoring form for Gokulam Kerala FC is all set to make history by becoming the first woman from Ghana to be a top scorer of the tournament.

Being a foreigner, everyone needs some time to adjust but that wasn’t the case for Elshaddai. She has been with the team for a few months now, and everyone makes her feel at home.

“The culture is new and everyone is like a family here to me. Coach is supportive in everything and I have met so many coaches but Anthony (Andrews) is the best amongst them.”

“The Hero IWL is a good platform for exposure to many players like mine, and my country also. They can see what I can do and what I am better at. The efforts, the enthusiasm, and the passion of everyone here make the league so competitive and interesting,” she averred.

“In comparison to other leagues, I will choose India to be my favourite one. It’s fast and progressive,” she expressed.

The Gokulam Kerala FC striker has already scored 19 goals in 10 matches so far, including 4 hat-tricks. She aims to score 20 goals and set a record for herself.

“Before starting this league I told myself that I will be the top scorer with 20 goals,” she smiled.

“The journey hasn’t been easy, and nothing comes easy. Without my teammates and coaches, I think this journey wouldn’t have been possible for me,” she added.

Before coming to India, Elshaddai has been a part of the Ghana Women’s national team since 2018 her football journey started when she was six-years-old, and got selected for the national team at an early age for her skills.

“I started playing when I was six-years-old. I used to play for junior high school and train with the boys. A coach then introduced me to the women’s team in Ghana. I joined the women’s premier team at the age of 13 when I completed high school and from there to the national team,” she informed https://www.the-aiff.com.

“As a professional player, everyone wants to travel to different countries to play football. India is the first foreign country where I came to play. The coach was looking for a striker and that is when Gokulam Kerala happened to me in October 2021,” she said

“My family was worried but I assured them that I will make history and come back. They are happy now about my performances, and less worried.”

Gokulam Kerala is all set to face Sethu FC on the final matchday on May 26, 2022, at 7:30 PM IST at Kalinga Stadium where both the teams have 30 points each. A draw would be enough for Gokulam to defend their title (the Malabarians are ahead on goal difference), while Sethu need the three points to claim their second title.

“The final day is exciting and we all have prepared well. We worked hard and took it one game at a time. We respect all our opponents and want to win the league.”

“India has got a lot of potential players, especially the younger ones. I am sure India will be one of the teams to watch out for in the upcoming FIFA U17 World Cup,” she concluded.