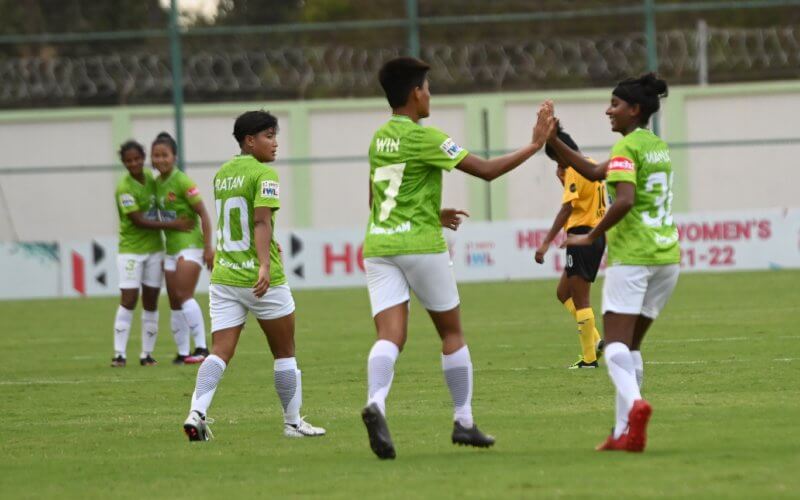 Gokulam Kerala FC handed an 8-0 thrashing to Mata Rukmani FC to bag the three points in the Hero Indian Women’s League on Sunday, May 1, 2022 at the Capital Stadium in Bhubaneswar. A hattrick from Gokulam’s Ghanian striker Elshaddai Acheampong within the first half ensured Gokulam’s unbeaten run in the competition to extend their winning streak to five matches.

Gokulam made a dominant start to the game with Manisha finding the net as soon as the 3rd minute. It was a corner from Dalima Chhibber that Manisha tapped in perfectly.

After the first quarter, the Malabarian side finally took over the game as they increased the lead to 3-0 with back-to-back goals from Soumya Guguloth and Elshaddai in the 17th and 19th minutes, respectively.

Things became a bit too tough for Mata Rukmani as Gokulam continued to maintain complete dominance in the game. In the 25th minute, a shot from outside the box landed at Elshaddai’s feet, as she made no mistake in sending it to the back of the net, making it 4-0. Minutes later, the Ghanain scored one more goal in the 28th minute to complete her hattrick. 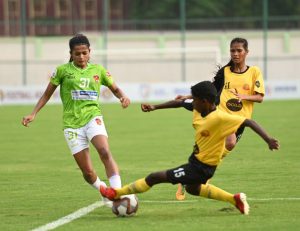 The Mata Rukmani custodian made some good saves but it was not enough to stop the goals. Soumya made it a brace for herself within the 39th minute. She headed the ball perfectly from a sharp cross by Dalima, making it 6-0 for Gokulam, going into the breather.

After the half-time break, Mata Rukmani seemed to be better as they came up with a resilient show at the back. Custodian Meena Kashyap made some brilliant saves to keep her side from conceding more goals. However, substitute Manasa finally broke the resistance, increasing the lead to 7-0 in the 66th minute.

Mata Rukmani got a few chances to pull one back but failed to utilise them and it turned out to be one more clean sheet for the Gokulam defence.

Finally, in the 85th minute, Jyoti put in the final nail as she went past the Mata Rukamani defence with tremendous pace, finding the top corner at the end of her run.

After this 8-0 win Gokulam Kerala remain at the top of the table with a five match winning streak in the Hero IWL.