Gokulam Kerala FC maintained their perfect start to the Hero Indian Women’s League 2022 campaign with a 6-1 win over PIFA Sports FC at the Kalinga Stadium on Thursday.

Gokulam Kerala FC dominated the ball possession in the early phase of the game. Spurred by a positive start, Karishma and Win Tun came close to scoring for GKFC but were denied by Payal in goal for PIFA.

The opening goal came shortly after through Win Tun who expertly found the back of the net with a header, just a few minutes before the half-hour mark. GKFC’s lead was doubled three minutes from half time by Manisha Kalyan. The forward picked the ball on the right wing and found the goal with a powerful left-footed shot towards the far post. Scorer of the opener, Win Tun, scored her second with an easy tap-in, moments before the half time break to extend the advantage to three. 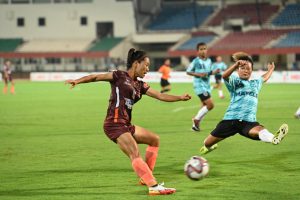 The second half saw more of Gokulam’s domination as Karishma scored the fourth, three minutes after the restart. However, against all expectations, PIFA scored at the hour mark and ended Gokulam’s streak of three clean sheets.

The Malabarians responded immediately with their fifth goal through Kalyan who scored her second of the night. Ratan Bala Devi also got on the scoresheet with a sensational left-footed curler in the top-left corner to score her side’s sixth.

Gokulam Kerala FC will play their next Hero IWL fixture against Mata Rukmani FC on Sunday, April 30 at the Capital Ground at 3:30 PM (IST) while PIFA Sports FC will aim to win against Sports Odisha on the same day at the Kalinga Stadium at 7:30 PM (IST)