God’s own country hosts a Santosh Trophy for the ages 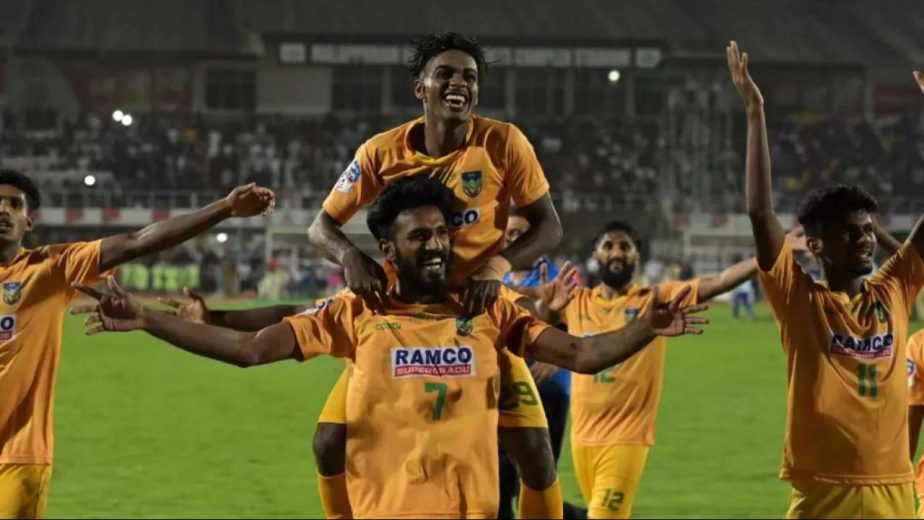 The Santhosh Trophy final clash between two powerhouses in Indian football eked out unbelievable numbers on 3rd May, Tuesday.

The penalty shootout between Kerala and Bengal, where the host side Kerala got the better of Bengal, was watched by 1 Lakh+ viewer on All India Football Federation (AIFF) Youtube and Facebook channels.

The final in Payyanad Stadium, Manjeri, was packed to the brim hours prior to kick-off. Fans who couldn’t make it to the stadium hosted screenings across the state. Bengal broke the deadlock in the extra time when Dilip Orawn’s flying header ignited Bengal’s 33rd Santosh Trophy ambitions. At the fag end of the game, the stadium erupted in unison when 24-year-old Bibin Ajayan rose to the occasion and headed home the equalizer. The rest is history. Kerala lifted their 7th Santosh Trophy title.

For the night’s most celebrated player, Bibin, the selection in Santosh Trophy will remain one of the most significant life moments. The youngster, when eight, was cast out of his home. Since then, he grew up in an orphanage in Aluva. As Bibin claims, football became his respite. Little did he know, the game could turn around his life.

The history of the Santosh Trophy

Santosh Trophy was one of the most prestigious events in the Indian football calendar for decades. First started in 1941, it has provided footballers with the platform to shine. In fact, the Indian team during the 1956 Olympics campaign consisted of the best performers from the Santosh Trophy. They reached the semi-finals beating Australia in the previous round.

Of late, the competition took flack due to the changing calendar. Gradually, it was losing its relevance. In 2009, Sunil Chhetri incurred an injury while playing the national championship, which led him to miss the national team call-up for the Nehru Cup.

The then boss Bob Houghton was furious with the incident. He went on to call the tournament ‘nonsensical’. The following year, the AIFF barred national team players from competing in the Santosh Trophy. The federation claimed that the tournament lacked purpose and needed intervention for its continuation.

Players from the Indian Super League, the premier league of Indian football, and I-League, the second division, were barred from participating. The tournament was made available for state league players with the criteria of five U-21 footballers in the starting XI.

It was evident that the Santosh Trophy was no longer a priority for the AIFF. While the Indian Super League and the I-League restarted after the pandemic, the state association’s league had to wait since it was last hosted in 2018-19. An estimation from industry reports states that the AIFF spent around 1-1.5 crores to organize the league. Whereas, it spent close to 15 crores for the I-League.

However, this year, when Kerala Football Association was granted the hosting rights, it breathed fresh air into the competition’s lost legacy. The tournament had fewer known faces but received massive support from local fans.

While the Indian Super League and I-League act as a feeder system to the national team, the All India Football Federation must rebuild Santosh Trophy as a platform for young players to thrive and clock more minutes. The Indian football federation has taken the right direction by hosting the competition in football-loving Kerala and must intend to build on this momentum.

The 75th edition of the Santosh Trophy was a testament that investing in advertisement and marketing initiatives are not mandated for fans to celebrate Indian football’s glorious competitions. It requires the right direction and strategy to reach the masses.