FIFA U-17 Women’s World Cup India preview: all you need to know about each group 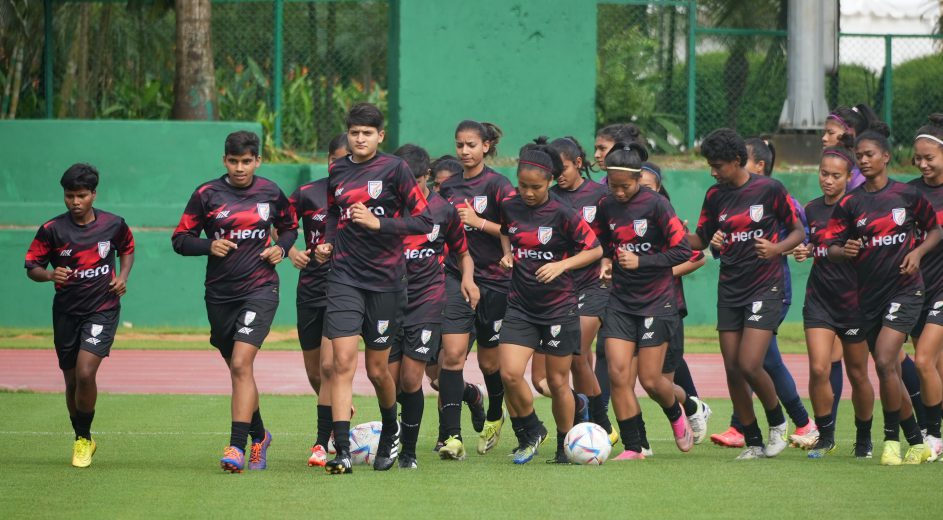 The FIFA U-17 Women’s World Cup India 2022™ is now less than a day away and all 16 participating nations have arrived at the venues, which are ready to host the talented young footballers, beginning 11th October.

Odisha and Goa will see the opening games being played with hosts India taking the field against USA from 8 PM IST at the Kalinga Stadium in Bhubaneswar. Morocco and Brazil are the other teams in India’s group.

The seventh edition of the prestigious tournament has four groups – A, B, C and D – and Navi Mumbai, the third venue, is set to host the grand final on 30th October.

The FIFA U-17 Women’s World Cup India 2022™ will see three former champions in France, Japan and Spain take the field. Meanwhile, Canada, Germany and New Zealand – along with Japan – will continue their proud record of participating in every edition of this spectacle.

After boys in 2017, it is now the turn of India’s U-17 women’s team to make their bow at the highest stage – the FIFA U-17 Women’s World Cup. India will want to ensure this journey becomes a part of folklore, but have to first overcome stiff challenges from USA, fellow debutants Morocco and Brazil.

Brazil, who will make their sixth appearance at the tournament, are the most successful CONMEBOL side, but do not have the most impressive record, winning 6 out of 17 games (2 draws and 9 defeats), and have never made the final four of the biennial youth World Cup.

Debutants Morocco and India are on the same boat, hoping to make a big impact this October. Meanwhile, USA have will be making their fifth appearance, with an eye on improving the record of 6 wins and 3 draws in 15 games. USA’s best finish came in 2008, when they finished runners-up; but have since not made it out of the group stages.

On the opening day of the tournament – 11th October – in Bhubaneswar, India takes on USA while Morocco will line-up against Brazil.

Among the favourites always, the ever-present Germans have only failed to progress from the group stage once, in 2014. They were at their most prolific in 2010, scoring a tournament-record 22 goals with Kyra Malinowski becoming the first player to score a hat-trick in consecutive games in a single edition of the tournament. Silverware though has remained elusive.

Nigeria, who have made the quarter-finals thrice in five appearances in the tournament previously, have seen a slump in fortunes recently and will seek to turn a corner in India. The Nigerians – having won 50% of all games played in the competition – registered the joint-biggest victory in the tournament’s history in 2012 when they scored 11 goals without reply against Azerbaijan.

Chile, meanwhile, are set to make their second appearance in the tournament and did not register any points in their previous bow. They had scored only once and conceded 10 goals in the 2010 edition.

Rounding up the group is New Zealand, who were hosts of the inaugural edition of the tournament. They have been an ever-present fixture, but only progressed past the first round once, and made it count, as they bagged the Bronze medal in 2018. 5 wins and 14 defeats in 21 games means the numbers are not siding with them, but New Zealand are known to land a few heavy punches.

Defending champions Spain are among the best teams in the tournament and have never finished outside the top 3 when they have qualified. Two Bronze medals, one Silver and one Gold show the team’s ruthless nature. In 14 games, they’ve scored 58 goals and won 7 of them, losing 4. Expect more of the same from the Spanish contingent.

While Spain is among the teams to beat, Mexico are not far behind either and have consistently improved on their showing at the FIFA U-17 Women’s World Cup, finishing runner-up in 2018. A re-match of the 2018 FIFA U-17 Women’s World Cup final in the group stage is an exciting prospect no doubt, as Mexico would be eyeing a reversal of the 2018 result. They’ve won 8 and lost 8 in 20 matches, and are definitely one of the teams to keep a close eye on.

South American side Colombia have always been among the more competitive sides in World Cup tournaments, and one expects nothing less this time around. However, the fact that they have not made it to the knockout stages of this youth tournament ever and have won only 1 game in 12, drawing 4, will make for welcome reading for their oppositions.

China PR are the fourth team in Group C, and they’re making only their third appearance at the FIFA U-17 Women’s World Cup. China have only won two games in 6, and have beaten South American sides on both occasions. They’re likely to give their fellow teams a tough game.

One of the powerhouses of Asian football, Japan is a team to watch out for. They have always made at least the quarter-final, and have played three finals, winning one in 2014. In their 30 games in the competition, Japan have won a whopping 22 and lost only 2. Japan, who last lost in regulation time in 2012, have scored 106 goals in all their games and conceded only 22. Expect more fireworks and a definitive challenge for the trophy.

Another ever-present team in the competition, Canada have failed to progress from the group stage only twice, and registered a fourth-place finish in the last edition. Undoubtedly, they will look to improve on that, and on the 9 wins in 26 games.

Former champions France, have a 50% record in the competition, having won one of the two editions of the FIFA U-17 Women’s World Cup they have participated in. The French team won the competition in 2012, while failing to make it out of the group stage in 2008. They have scored 22 times in 9 games, winning 3 and losing 1, and have also been part of the highest scoring game in the competition (10-2-win vs Gambia).

And while the French are clearly no pushovers, for Tanzania, the occasion is a momentous one as it will be the first time that they will be represented in the final stage of any FIFA competition.