Bengaluru FC kick off the campaign with a controversial win 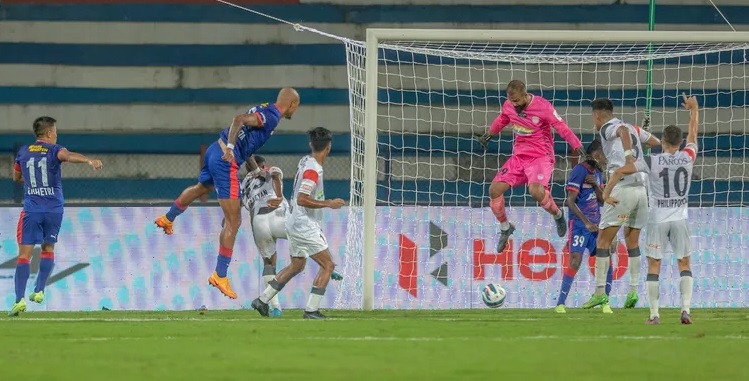 The Blues, who returned to their Fortress after a two-season gap, saw 19,379 fans make their way into the stands for an enthralling game that saw Alan Costa head home the winning goal in the 87th minute to help Bengaluru FC pick all three points.

Bengaluru started out brightly and had the first big chance of the game when Naorem Roshan down the left wing blitzed past a NEUFC defender into the box before deftly cutting the ball back for Sivasakthi. The unmarked striker’s attempt to place the ball with a first-time shot flew just inches wide of the post.

By the end of first half, BFC had another chance to take the lead when a long ball was played into the NEUFC box and Roy Krishna did well to shield it. Krishna then floated up a cross towards the far post which Siva Narayanan managed to bring it down amidst a recovering NEUFC defense. The ball comes to Sunil Chhetri who sets it up for Siva to have a pop. The latter’s right-footed effort however comes off a NEUFC defender and goes behind for a corner but nothing comes off it.

The second half started out on a cagey note as neither side managed to create clear-cut chances forcing both managers to ring in substitutions. The game livened up quickly as Udanta first went close for Bengaluru with his strike going wide off the post while at the other Jon Gaztanaga clean hit from distance was deflected off for a corner.

With only minutes left to play, Bengaluru won a corner that substitute Javi Hernandez swung in for Costa at the back post, as he nodded down and past Arindam Bhattacharja to break the deadlock and give the Blues the lead.

With four minutes added on, NorthEast United had the ball in the back of the net at the other end through Jon Gaztanaga’s strike from distance. However, in consultation with his assistant, referee Rahul Gupta pulled it back, citing an infringement in the box. NEUFC were certain that they had their equalizer in the added time only for the goal to be canceled. Jon Gaztanaga furiously sprinted towards the linesman and so did Marco Balbul, the head coach of NEUFC. The referee did not like the intensity of the head coach toward the official, showing him a red card for the act.

The Blues saw the remainder of the game through to secure three points.

Second Half Goalfest Sees Blasters Secure Win Against East Bengal
Up to us to get the job done, says Bibiano Fernandes ahead of Saudi Arabia clash