Fernandes, Mendigutxia on target as NEROCA edge past Kenkre FC 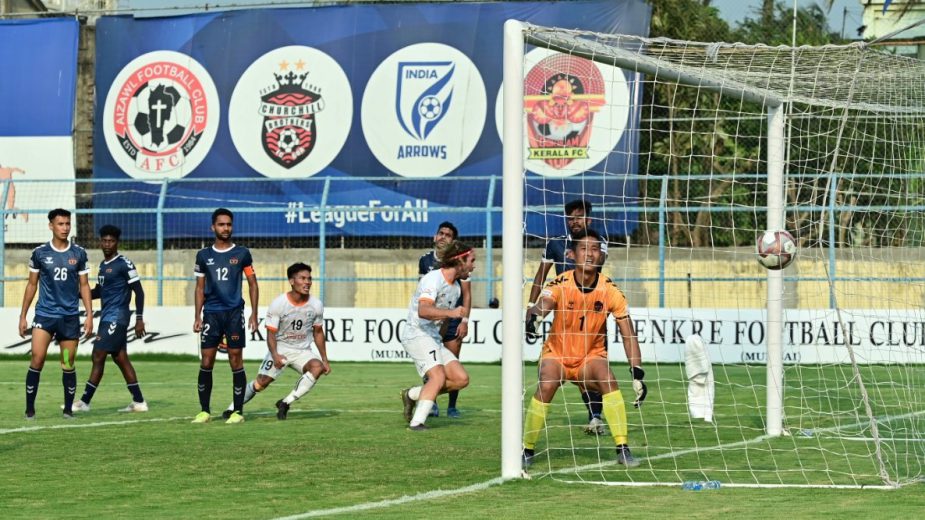 NEROCA and Kenkre kick-started the first match of the day with high intensity as they looked to control the ball in the midfield early in the game. A couple of chances were created inside 10 minutes, including Dhananjoy Singh’s efforts to set the ball for Mendigutxia in the ninth minute through a cross from the left side.

NEROCA thoroughly dominated their bottom-placed opponents and looked like favourites to break the deadlock with their high pressing and tackles. They were almost awarded for their efforts as Sweden Fernandes came close to opening the scoring in the 18th minute. The ball was set up by Mendi after receiving a left side cross from Khaiminthang. However, Sweden failed to connect with the header.

Two minutes later, Khaiminthang almost found the back of the net but Tenzin Samdup denied him the goal by outstretching his foot and after that, it was just a matter of time before NEROCA score the opening goal, through Sweden Fernandes as the winger netted an outstanding goal after beating the goalie at the near post.

The Orange Brigade continued with their pressing as the end of the first half neared in search of their second goal while their rivals looked for an equalizer.

Kenkre created the first chance of the match in the 42nd minute through Ranjeet Singh Pandre after NEROCA defenders fumbled but the striker was not able to put it past the goal line. Three minutes were added at the end of first-half regulation time and it was all Kenkre needed to level the contest, courtesy of Pandre’s perfect finish in the 45th minute.

NEROCA had the chance to go one up again at the start of the second half but Mendigutxia missed a sitter. Seconds later, Khaimnthang made an unsuccessful attempt from inside the box. The Spanish forward, however, soon rectified his mistake as he netted the second goal for his side in the 50th minute as NEROCA went one up once again.

Two minutes later, a dangerous header from Nam came close to levelling the score once again but it was cleared off by Neroca defenders.

Following Mendigutxia’s goal, the game gathered pace as Kenkre players were not ready to bow down without a fight. Khaiminthang made two back-to-back attempts in the 63rd minute but his efforts went in vain as he failed in penetrating Tenzin’s wall.

Mendi looked to double his side’s league in the 68th minute but his strike went over the bar. Kenkre players upped the ante as they frustrated their opponents with their precise stroke play.

Khaiminthang took a late attempt in the 88th minute but his shot deflects for a corner. Five minutes were added in the end but it was not enough to change the scoreline of the match.