ARA FC continued their winning streak in the ongoing Hero IWL Qualifiers by defeating YWC by a 4-3 margin in the final encounter on Tuesday, April 5, 2022, at the Ambedkar Stadium in New Delhi today to qualify for the Hero IWL, which is to be held in Bhubaneswar from April 15, 2022.

Shreya Oza’s early brace in the 9th and 16th minutes raised the tempo of the match, giving the upper hand to ARA FC. 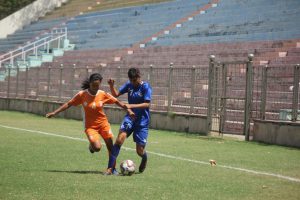 ARA FC continued to dominate the match but failed to make the most of their chances. In the 27thminute however, a goal from Salam Rinaroy Devi from a distance rattled the bar and went in to break the deadlock for YWC as the half time scoreline read 2-1 in favour of ARA FC.

YWC came out all guns blazing in the second half, and it was Hoineihat, who scored to put the side from Manipur on level terms in the 53rdminute.

It did not take ARA too long to reclaim their lead, as Anju netted a 68thminute goal. The match came to a frantic end, as Remi Thokchom of YWC scored for her side before Kiran finally made it 4-3 for the Gujarat club in the dying minutes to ensure ARA’s victory and qualification to the Hero IWL.

Earlier in the day, Guwahati City FC and Golazo FC played out a goalless draw at the Ambedkar Stadium, taking their respective points tallies to one each. Both the sides were out of contention for Hero IWL qualification prior to this game.

Fernandes, Mendigutxia on target as NEROCA edge past Kenkre FC
Gokulam Kerala hold on for vital win against Sreenidi Deccan