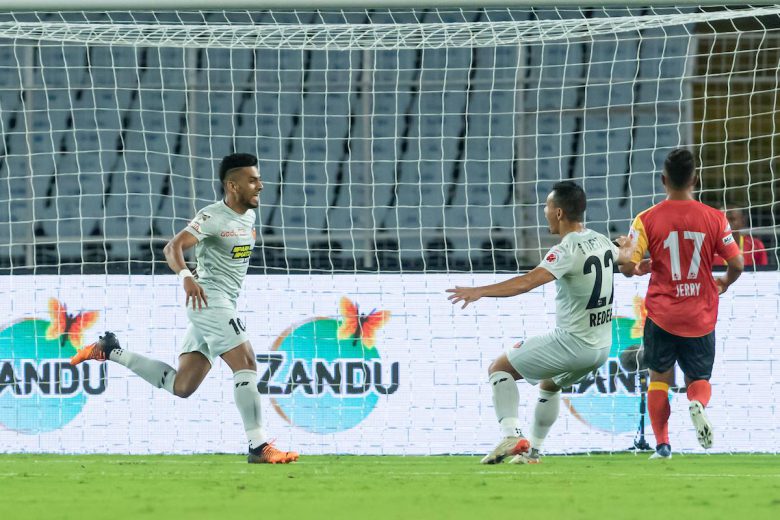 Brandon Fernandes and Edu Bedia on the scoresheet for the Gaurs

Goa, October 12, 2022: The right start to their Hero Indian Super League (ISL) 2022-23 campaign was what FC Goa needed, and that is exactly what they got at the Vivekananda Yuba Bharati Krirangan on Wednesday as they beat East Bengal FC 2-1, beating the Red and Gold in thrilling fashion, scoring in the 4th minute of added on time.

Brandon Fernandes had  earlier handed the Gaurs an early lead before Cleiton Silva netted for the Torchbearers’  from the penalty spot.

Earlier in the evening, Alvaro Vazquez, Iker Guarrotxena and Marc Valiente were handed their FC Goa debuts by head Coach Carlos Pena, who in turn also oversaw his first game in charge as the Club’s chief tactician.

Shortly afterwards, the Gaurs got off to a dream start, when, in just seven minutes after kick-off, the Gaurs found the back of the net for the first time this campaign through Brandon.

Guarrotxena picked Vazquez first with a pass, and the latter lobbed the ball over an East Bengal defender to the Club captain who then slotted the ball home past the goalkeeper.

The remainder of the first half, albeit goalless, saw the Gaurs continue their domination as they created scoring opportunities on a regular basis.

The Gaurs early domination nearly led to a double delight whenRedeem Tlang fired inches wide from a Brandon cross from the left. The 39th and 40th minute saw Goa miss two more gilt-edged chances, first when Vazquez forced a close save and then when Anwar Ali headed wide off Edu’s corner-kick.

Returning from the half-time break, East Bengal looked rejuvenated and intensified their attacks. They came close to scoring in the 58th minute when Jordan O’Doherty shot one right over the crossbar, and Cleiton Silva equalized soon after.

The Brazilian won a penalty for his side in the 64th minute, and proceeded to send Dheeraj Singh the wrong way as he tucked home.

With about 20 minutes left on the clock, Pena chose to hand debuts to Noah Sadaoui, Fares Arnaout and Ayush Chhetri. While the trio added strength to the Gaurs, the scoresheet remained on level terms until Edu took matters into his own hands in injury time.

The Spaniard took a free-kick from near the half-way line and managed to land the ball in the box. While a few FC Goa players looked to get a touch on it, no one could manage that and ultimately the ball bounced past the diving goalkeeper and into the net for the Gaurs to win the clash.

Courtesy of the win, FC Goa find themselves at fifth place on the ISL 2022-23 points table with three points. Their next challenge is an away clash against Chennaiyin FC on October 21.