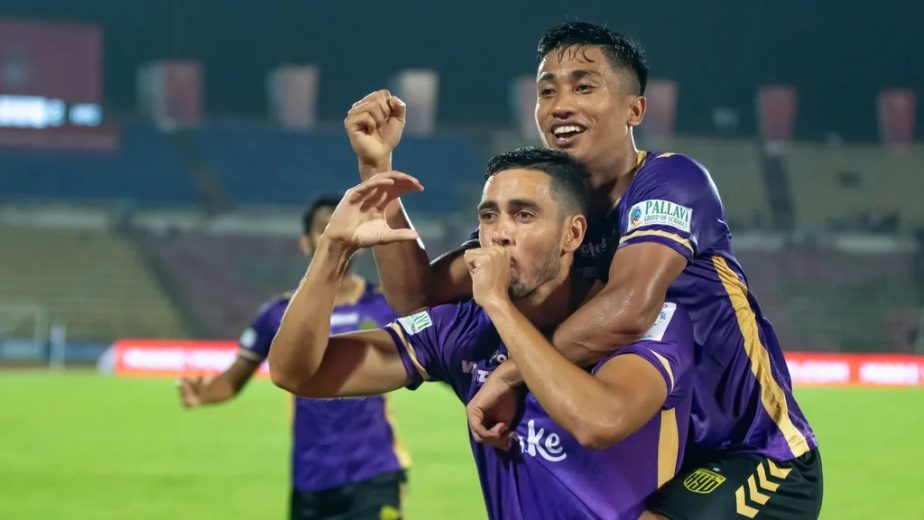 Hyderabad FC secured their first win of the season after a dominant 3-0 victory over NorthEast United FC in the Hero Indian Super League (ISL) at the Indira Gandhi Athletic Stadium in Guwahati.

Hyderabad FC dominated the game as Bartholomew Ogbeche, Halicharan Narzary and Borja Herrera got their names on the scoresheet. They finished the game with nine shots on target while NEUFC could only muster two.

In the 13th minute, there was a sign of what was to come for the Highlanders on the night, when Mohamed Irshad brought Halicharan Narzary down on the left flank and had his name taken by the referee. From the resulting freekick, Mohammad Yasir whipped a beautiful ball into the box and Bartholomew Ogbeche simply side-footed the ball into the back of the net to give the defending champions an early lead.

Midway through the first half, Hyderabad FC broke on the counter with Yasir. The winger played an inch-perfect low pass to Narzary on the opposite flank. Narzary then played the ball into the path of Javier Siverio before the Spaniard’s attempt was superbly saved by Arindam Bhattacharja at full stretch.

In the final minute of first-half stoppage time, NorthEast United came close to leveling the score. Romain Philippoteaux’s cross from the right flank was parried by Nikhil Poojary and went straight to Jon Gaztanaga. The Spanish midfielder’s looping ball towards the far post was inches away from youngster Parthib Gogoi. It ended up being one of the few highlights for the home team on the night.

Five minutes into the second half, Ogbeche and Siverio played a sublime one-two before the former was taken down inside the box by Gaurav Bora, and the referee immediately pointed to the spot. Ogbeche stepped up to take the penalty but Bhattacharja went the correct way to deny the Nigerian, keeping the Highlanders in the game briefly.

Closing in on the hour mark, the NorthEast United FC shot-stopper produced another great save. Hitesh Sharma crossed the ball in from the left flank before Siverio’s goal-bound header was palmed away by Bhattacharja. Minutes later, substitute Rochharzela found Matt Derbyshire with a cross, only for the striker to put it wide of the post.

In the 69th minute, yet another instance of sloppiness from NorthEast United FC resulted in a goal-scoring chance that was successfully taken. Bhattacharja rolled the ball towards Bora, who was robbed of it by Narzary. The 28-year-old kept his composure and slotted in Hyderabad FC’s 100th Hero ISL goal. Four minutes later, Narzary combined well with substitute Borja Herrera on the left flank. Herrera scored Hyderabad FC’s third goal of the evening, just two minutes after coming on.

Hyderabad FC’s dominance could have resulted in more goals. Four minutes from regulation time, striker Ogbeche rattled the crossbar and the play only resulted in a goal kick. The final scoreline was only the second instance of a team this season not managing to get on the scoresheet, with the previous instance also involving NorthEast United FC.

Hyderabad FC will now make the long trip back home to host Bengaluru FC in their next game on Saturday, October 22. The Highlanders will be hoping for a positive result when they host East Bengal FC on Thursday, October 20.