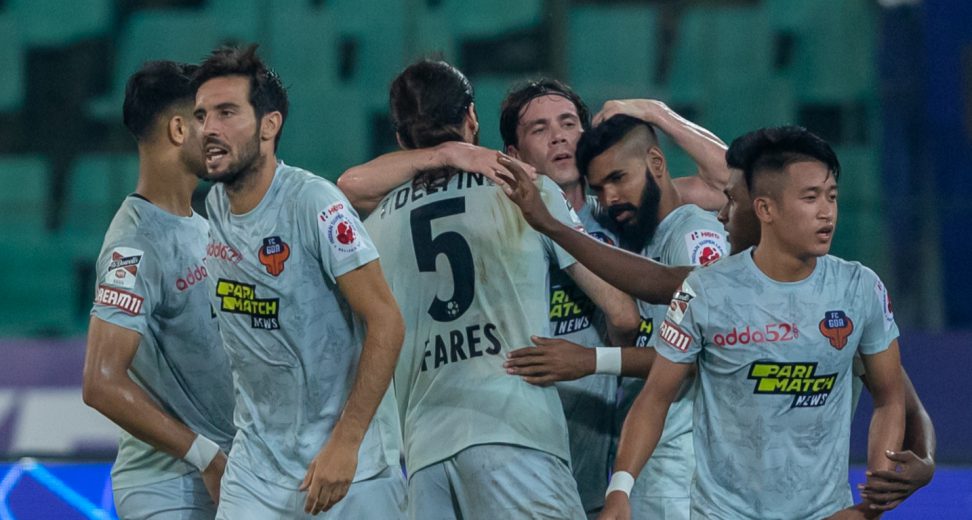 Goa, October 21, 2022: Noah Sadaoui scored and assisted once each against Chennaiyin FC while the backline recorded their first clean sheet to power FC Goa to their second win of the Hero Indian Super League 2022-23 season, at the Jawaharlal Nehru Stadium in Chennai on Friday night.

The victory also saw the Gaurs climbing to the top of the standings, having taken home all six points on offer from the opening two games.

FC Goa repeated the script from their heroics against East Bengal FC in their season-opener, as they netted an early first goal – this time through Redeem Tlang – before scoring a late second to seal the deal.

Earlier, the Gaurs’ head coach Carlos Pena rang in just one change from the playing XI that started against East Bengal – as Alvaro Vazquez made way for Noah Sadaoui.

It did not take long for the Moroccan international to justify his selection, as he latched onto a 50m-long pass from Edu Bedia and zoomed into the opposition box, before firing a cross from the left. His perfect ball found Redeem Tlang, who escaped his marker and guided his header past the goalkeeper from close range.

The shock of conceding the goal became a wake-up call of sorts for Chennaiyin FC, who created several chances in the minutes that followed.

Rahim Ali, Petar Sliskovic and Jiteshwor Singh got chances to pull the trigger at the end of well-strung moves, but they could not beat Goa shot-stopper Dheeraj Singh who kept his team in the clash with extraordinary saves on each occasion.

As the first half progressed, the Gaurs gained more control over the ball and that showed when Noah Sadaoui got a chance to double their lead in the 21st minute. The 29-year-old received a long ball and ran with it towards the edge of the box before attempting a shot that narrowly missed the target.

Chennaiyin shows the character, Goa with the final sting

Just before the half-time break, Pena’s boys came close to scoring once again but luck did not favour them as they returned to the dressing room with a slender lead.

Returning from the break, the Marina Machans started strongly with Rahim Ali firing a shot that went just wide. Following the changes made, Goa also slightly tweaked their tactics, as they looked to play on the counter.

As a result, the match witnessed end-to-end action with both teams creating a handful of chances. Both sides were, however, hampered by a lack of creativity in the final third which prevented them from scoring – until the Gaurs pulled off a late surprise once again in stoppage time.

Edu Bedia, who pulled the strings from midfield for Goa, got himself into the thick of things once again as he fired another long ball forward that completely exposed the Marina Machans’ defence. This time, Noah Sadaoui only had to pick up the pass and beat the ‘keeper, which he did expertly to get the Gaurs the three points from the clash.

Carlos Pena’s boys will now look to make it three wins a row on October 29, when they take on Hyderabad FC in their final assignment on the road before they finally come home on November 3.