Blue Tigresses back each other, focus to make their sacrifices count

MUMBAI: The Blue Tigresses have been reminding themselves of all the sacrifices which they have made on the pathway to the AFC Asian Cup India 2022. The small steps have brought them closer to the bigger goal in their mission to move forward together. A day prior to their opener against IR Iran, the Tigresses prowled down the memory lane.

“It’s been over a year that I haven’t seen my parents. First, I was under rehab, and then the pandemic struck. I was so concerned, and now I am in the camp for a long time. Sometimes I felt lonely, but it was all for a reason,” Sanju Yadav mentions in a low voice. “All of my sacrifices have come in for the tournament. It’s the biggest I will play so far. I have to make it count, at any cost.”

Sanju had suffered from an ACL injury, and it was not till last year that she could get back to the training field. While it may have changed her as a player, in some manner, the determination to do well spurs her on.

“Yes, it was tough to come back after surgery, I had spent long hard months in physiotherapy, even before the National Camp started. When I finally got back to the pitch, the feeling was slightly different. The doctor had told me that I was good at playing, but my body was still not reacting like it used to before,” recalled Sanju. 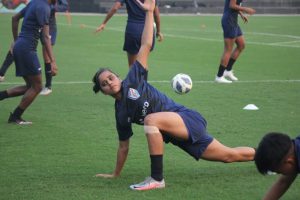 “The doubts and the apprehensions begin to creep in. But the coaches were accommodating enough in those phases, and soon I could feel my legs beginning to do the things my mind wanted them to do.”

Right from assembling for a six-month camp in Jamshedpur, to playing some of the toughest teams in the world, and Asia, the Tigresses have grown together. The sacrifices the Blue Tigresses have made have been immense, all with an intent to make their country proud on the continental stage.

Young winger Manisha Kalyan, who had netted the famous goal against mighty Brazil back in November, last year: “Many people could not see my goal live because the match was in the wee hours of the morning. But I got so many messages after they saw the highlights. That’s over now, though – the Brazil match was also a part of the preparation for the Asian Cup, this is the biggest stage we’ve got to so far.”

A few days after the match against Brazil, another player had had a special occasion, when the Blue Tigresses faced Venezuela. Midfielder Karthika Angamuthu made her senior debut against the South American nation.

“My India debut will always be a special moment for me. The coach had also presented me with small memorabilia to mark that debut, and that’s something that I will keep forever,” smiled Karthika.

“But the feeling that I am getting ahead of the Asian Cup is one that surpasses that as well. The competition for those 11 spots on the field is immense, albeit a healthy one. If I do get my chance, I want to grab it with both arms. I want to make this more special than my debut.”

Head Coach Thomas Dennerby himself has been away from his family for a long. “But no complaints. The girls are the real stars, and we need to help each other out. In such a tournament as the Asian Cup, we need to stick together,” he smiles.

The team bonding is visible in the sessions, be it the gym sessions, the sessions on the field, the meals, the leisure time at the team hotel. It’s one team, one unit – the Blue Tigresses. The seniors of the team – Aditi, Ashalata, Dalima, Kamala, Manisa – make that extra effort to keep all focused – sometimes with a hand on the shoulder, the next time over a cup of coffee, then with some jokes, and chats – it just goes on. They stay focused, yet away from the tension.

Striker Pyari Xaxa is one who is always the last to leave the training ground. Even after all has ended, Pyari can be seen urging her teammates to put a few more crosses into the box — for her to finish. Sometimes she would urge the goalkeepers, or even the goalkeeping coach to stand in goal, while she practiced a few shots.

“I have a simple philosophy for football. I love scoring goals, and I love helping my teammates score as well,” says an ever-beaming Pyari. “They say practice makes oneself perfect, and I want to leave no stone unturned. We have some tough opponents in the Asian Cup, and maybe one chance is all we could get in certain matches.”

“Over the past six months, I’ve always tried to make sure that I practice that extra bit so that when that chance does come, I am ready to take it,” opined Pyari.

The Blue Tigresses take on IR Iran in their opening match of the AFC Women’s Asian Cup India 2022 on Thursday, January 20. The match will kick-off at 7.30 pm IST, and will be broadcast live on the Eurosports channel, and streamed live on Jio TV.

Also Read: We represent the girl child who has been deprived, Blue Tigresses say in unison

We represent the girl child who has been deprived, Blue Tigresses say in unison
AFC Women’s Asian Cup hit by COVID-19