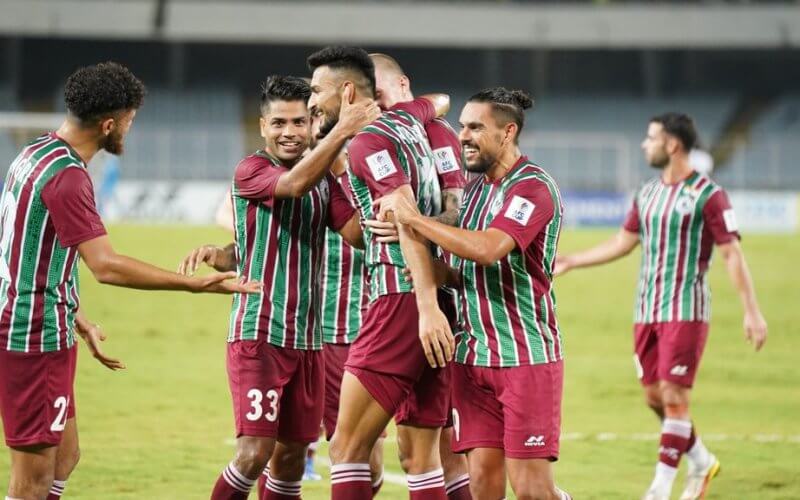 ATK Mohun Bagan scripted a one-sided 5-0 win over Sri Lanka’s Blue Star SC in their 2022 AFC Cup Preliminary round 1 match at the Salt Lake Stadium, in Kolkata, on Tuesday evening. For the first time in over two seasons, the club played a competitive match at home, in front of their fans.

Back in their den, ATK Mohun Bagan took the driver’s seat from the starting whistle, with their typical possessional style of football on display. Intentions were clear in the 6th minute,  when Prabir Das squeezed in a through ball towards an unmarked David Williams inside the box, but the Australian failed to connect with accuracy.

In the 10th minute, a move stitched up by Hugo Boumous and Kiyan Nassiri on the left flank haunted the Blue Star’s box, the defenders, rising to the occasion, denied a shot on goal.

Out of the blue, a counter-attack in the 12th minute gave the Sri Lankan outfit a golden opportunity to draw first blood, only to see Arsh Anwar produce a remarkable save from a one-on-one situation. Despite the occasional sparks, ATK Mohun Bagan were by far the dominant side.

Almost identical to Williams’ miss, young Kiyan Nassiri was wasteful of slotting the ball home after he was on the receiving end of a pin-point cross from the right flank, in the 19th minute.

Constant pressure from the Mariners finally paid off. A move engineered by Hugo Boumous from the midfield dribbling past players was eventually converted by a Joni Kauko shot in the 24th minute.

It took another five minutes (29’) for the hosts to double the lead, with Manvir Singh taking advantage of poor defending from the Blue Star defence and putting it past the goalkeeper with calmness.

Juan Ferrando’s men ran riot in the closing 10 minutes of the first half, with Prabir Das’ rocket-like shot being saved acrobatically by Blue Star’s shot-stopper. Unable to soak the pressure, the visitors conceded a penalty.

Joni Kauko made it 3-0 from the spot in the 39th minute and put the contest to rest. The Mariners maintained their healthy lead going into the break, much to the delight of the supporters present in the stands.

Contrary to the trend, the Sri Lankan team started with almost an equal footing in the second half, yet, goals eluded them, as ATK Mohun Bagan’s defence was hardly challenged.

Normalcy returned as the Mariners created an opening for the fourth goal in the 55th minute, yet Williams’ shot diverted after it struck the goalkeeper on the way.

The visitors did not give up, as they kept on pressuring their opposition defence. It was in the 69th minute of the game that they were gifted a grand opportunity to pull one back, yet Arsh Anwar, who was having an evening to remember, saved from a point blank range to keep ATK Mohun Bagan’s lead.

Substitute Bidyananda Singh was played on the right by a clinical through ball from Hugo Boumous in the 73rd minute of the game. Just like his counterpart, the Blue Army gloveman showed off his skills to deny the fourth.

David Williams, who was itching to get on the scoresheet, found his mojo in the 76th minute, connecting a well attempted cross from the right by fellow Mariner Manvir Singh to pile on Blue Star’s misery.

The nightmare was not over for the side from the neighbouring country.

Manvir Singh completed his brace in the 89th minute after he was fed with a sensational through ball from Hugo Boumous. Already outrunning his marker, the striker placed the ball inside the target without much hassle to make it 5-0.

ATK Mohun Bagan kept their winning margin intact till the final whistle to set up a date with Abahani Dhaka in the Preliminary round 2 of the 2022 AFC Cup, one week later.

Also Read: I like the culture of India and I know football is in their blood, says RUFC head coach Bonet

I like the culture of India and I know football is in their blood, says RUFC head coach Bonet
Hero Indian Women’s League 2021-22 to premiere LIVE on Eurosport India