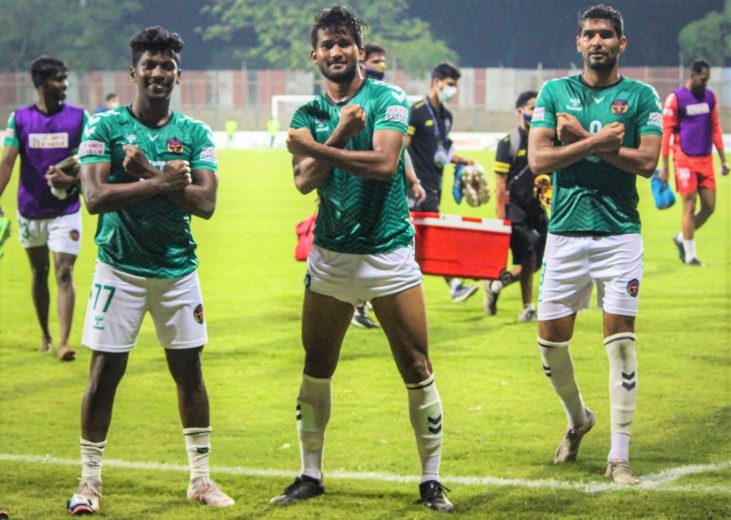 Kenkre extend the unbeaten run in phase-2 to 4 matches as Aravindraj’s first goal of the campaign keeps their survival hopes alive.

Kenkre head coach Akhil Kothari made 2 changes to the starting lineup that drew with TRAU FC last time out. In came Pravitto and Tenzin who replaced Siddharth and Padam for today’s match.

Real Kashmir FC started the proceedings but both sides took a slow and steady approach to the game in the early minutes.

Akhil had to make a forced substitution early in the game as Ranjeet got injured and Yash replaced him.

Kenkre got their first chance in the 36th minute of the game. Akeraj took a shot from a distance but his long-range effort went over the bar.

The best chance of the game for Kenkre came in the 38th minute. Vijay put the ball into the box from a corner kick, Pravitto headed it well but it took a bounce before the Real Kashmir keeper and went above the bar.

Just before the half-time whistle, Kenkre’s Nam made his presence known in the defense and got the better of Real Kashmir’s Bernard who missed the target.

The referee blew the whistle and the first half ended in a goalless draw. 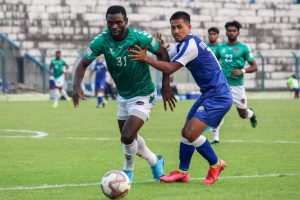 In the second half, it looked like the Kenkre head coach had a persuasive conversation in the dressing room during the break. Kenkre approached the second half with a lot of determination and aggressive intent.

Kenkre’s Suraj put a cross in the 55th minute and Aravindraj took a shot but Bilal collected it to keep the scoreline nil.

A minute after the hour mark, Suraj put another lofty cross into the box, Yash headed it in but his on-target attempt was cleared by Real Kashmir goalkeeper Bilal Khan.

In the 63rd minute, Vijay on the right side dribbled past the Real Kashmir defense and took a shot, but his curling effort was deflected off the woodwork.

In response, Real Kashmir went on in attack, hit the crossbar twice through Tiago & Bernard attempted to open the scoring only to see their efforts put to rest by the crossbar in the 68th & 70th minute respectively.

In the 78th minute, Kenkre earned a corner and Vijay took the shot. The ball came from the corner and Khongsit took a shot on the edge of the box which was headed home by Aravindraj as he gave Kenkre the lead.

Real Kashmir FC tried hard to get back into the game after going down but couldn’t find the leveler as the game ended in a win for Kenkre.

The win comes with a fresh breather for Kenkre. The battle for saving relegation intensifies and Kenkre FC will leave no stones unturned when they face Indian Arrows on Indian Arrows on 4 May 2022.