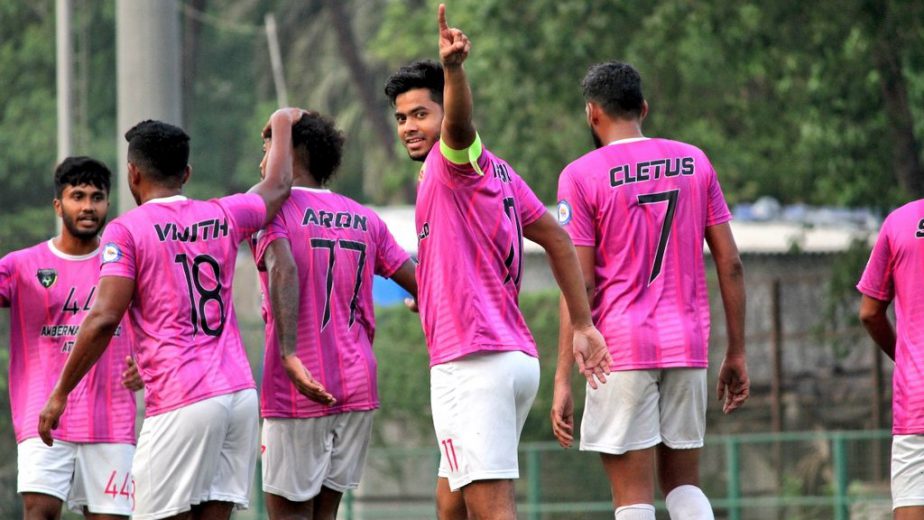 A brace from Aaron D’Costa and a goal each from Allan, Arif, and Himanshu was enough for Ambernath United to collect all 3 points against KSA.

From the very first whistle, both the teams started playing well. KSA was building pressure from the beginning and had a few chances to break the deadlock but failed to do so. After some attacking movement by KSA, Ambernath United reshaped themselves and went into the attack.

In the 22nd minute, Alan Dias gave Ambernath United the lead. A low cross from the right flank came into the box and an unmarked Allen drove the ball into the net to open the scoring.

Aaron D’Costa scored the second goal in the 40th minute for the Steven Dias coached side. The forward made a solo run and made no mistake in finishing as he doubled his team’s lead.

In the second half, to find a response, KSA created some chances of their own but Ambernath United’s Tejas Raut and Umesh Perambra remained strong in defense and repulsed any attacking moves from the opposition.

The Steven Dias coached side showed no mercy to KSA as they keep on attacking in the second half as well. Aaron scored his second goal of the day in the 65th minute.

Substitute Himanshu Patil scored the 5th goal for Ambernath United in the 87th minute. Coming off the bench, the attacker made a darting run in counter-attack and took a shot from the edge of the box, and slotted the ball home.

The referee blew the final whistle and Ambernath Utd Atlanta FC registered their sixth consecutive win. It was their fifth consecutive match where they scored five or more goals.

Ambernath United have so far scored 39 goals in their last six matches and conceded none. With a 100% win record and a better goal difference, they are comfortably sitting at the top of the league. They will next take on Kenkre FC on 18 April 2022.

Also Read: Indian Women’s League – All You Need To Know!