Youngsters take inspiration from SAFF triumph ahead of U23 Qualifiers 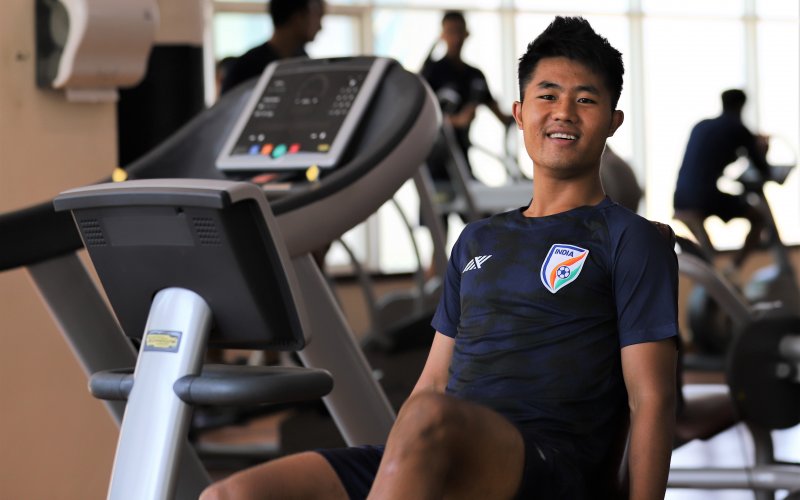 Lalengmawia and Suresh Singh are no more juniors. Suddenly they have been elevated to the status of senior players in the U23 National Team squad currently in Dubai for the AFC U23 Asian Cup Qualifiers. They have the senior team badge on their shoulders, and most recently, a SAFF Championship Gold medal around their necks. Add Rahim Ali and Dheeraj Singh to that list too.

“Absolutely not,” we are still juniors. “We are still U17 World Cup team members,” commented Suresh Singh. Lalengmawia nodded.

The duo has brought forward the professionalism and discipline of the Senior squad into the U23 contingent. Their current teammates, most of whom have been with them at the U17 World Cup team, and later on in the Indian Arrows never miss that chance to remind them about their seniority.

“The SAFF Championship in Maldives was a huge learning experience. Life for a footballer is not about what is being done on the field, but also off it, and a major part of that,” Lalengmawia expressed.

“We were not off to a good start, and there was disappointment all around. It was a do-or-die situation for us, everyone had written us off. That was from there when we turned the tables – all stuck together – the senior players, ourselves, the technical and support staff, and obviously the Coach,” Suresh stated.

“The team spirit, the togetherness, the self-belief helped us win it. We will carry the experience with us forever.”

The journey for all of them had started long back at the AIFF Academy project in Goa for the U17 World Cup. Life was never a bed of roses, especially staying away from the family at that tender age, not to forget the immense competition for slots even at that age. But the duo remembers each moment vividly.

“We were kids, not just the two of us — but the entire batch. All we wanted to do was to play football. We had looked around, and were looking for a platform to play, and continue playing. The sole platform was the Academy set-up in AIFF, and our journey began,” Lalengmawia, quipped.

“From there to here has been a dream,” Suresh added. “The exposure made us confident. And now it was a good start with the Senior Team to have won the SAFF. I even went on to score in the final,” Suresh’s face lit up.

“When I was a kid, or rather we all were kids, we used to assemble in front of the television to watch the Senior Team play. Sunil Chhetri was our idol along with Subrata Paul, Jeje Lalpekhlua and others. Now we have graduated to the Senior Team and it feels surreal to share the same dressing room with Sunil-bhai,” Rahim echoed.

“We had a dream – all of us. We still nurture that dream. We have achieved only a part of it and it motivates us to dream further, and beyond,” Dheeraj maintained. India play Oman in their first match of the Qualifiers of the AFC U23 Asian Cup on October 24 which will be followed by matches against UAE and Kyrgyz Republic respectively.