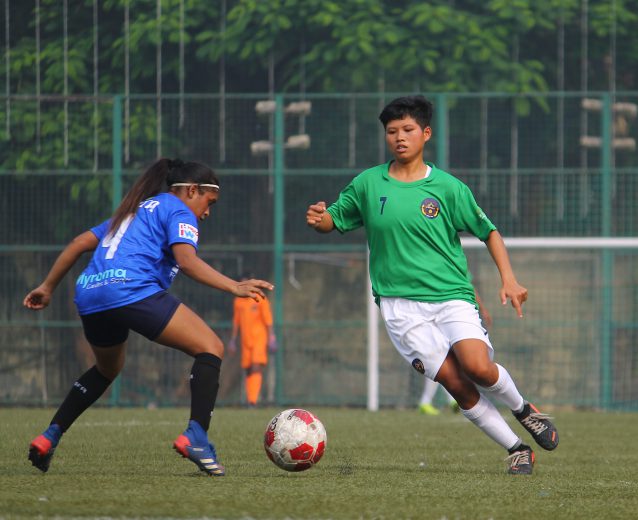 Second half blitz from Kenkre FC girls eventually gives the Mumbai based club a comfortable 3-1 win over Nagpur’s Amma FC after the latter had taken a 1-0 lead in the first half on Match day 2 of WIFA Women’s Football league. Meanwhile in the second game of the day, SP Football Academy breezed past India Rush SC to kickstart their campaign with a win.

In the Opening game of the day, Kenkre FC faced off against Nagpur’s Amma FC at the Cooperage Stadium, Mumbai. After an even start, Kenkre started dominating the possession. However, against the run of play, it was Amma FC who took the early lead when a counter attacking move resulted in Punam Kumari producing a calm finish to make it 1-0. Kenkre continued to attack at the other end but failed to beat Amma FC goalkeeper Priyanka.

In the 2nd half, Kenkre showed more intent and looked sharper with their passes and the hard work eventually paid off when in the 53rd minute, Deniese Pereira after receiving the ball from midfield rounded off the Amma FC Goalie to put the ball in to the net and level the scores. Soon after the hour mark, Kenkre took the lead when Pranita’s cross from the right flank was calmly finished off by Yumlembam Thailand Devi.

In the 81st minute, Kenkre put the game to bed when another cross from Pranita from the right was tapped in by Kavya Jaiswal to make it 3-1. In the 2nd game, Thane based SP Football Academy faced off against India Rush SC from Mumbai. The thane outfit looked in control of the game for most parts with occasional threats from India Rush. India Rush had started the game brightly but once SP Defenders settled down they started dominating the game. Afreen Peerbhoy scored the opening goal in the 23th minute of the game to put SP Football Academy in lead. India Rush held on to the 1 goal deficit and mustered few attacks of their own before the end of first half but couldn’t break past SP defense.

In the second half, around the hour mark SP Football Academy doubled the lead after a mix up in India Rush defence resulted an own goal. The goal killed the India Rush Momentum as not long after SP Football Academy Substitute Jahnavi Shetty made it 3-0 to kill the game. SP continued their attack from there on but India Rush keeper Farida Bano pulled off some save later on the game to keep the score line respectable 3-0

Also Read: Being the first club from the state, Rajasthan United aims to leave a mark in I League