The Hero Indian Super League 2020-21 was a season filled with amazing moments. The 7th edition saw 298 goals in 115 games across the span of 5 months. Speaking of goals and individual attributes, many players caught attention. While there were 298 goals scored there were 605 saves. Goal-keepers ruled the league with their terrific displays and proved to be the key performers.

FootballCounter lists the top 5 goal-keepers this season who caught our attention: 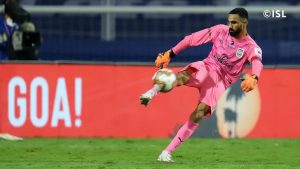 Amrinder Singh played for Mumbai City FC who were the Champions and the League Shield winners this season. He also captained the Islanders. Previously Amrinder played for ATK and Bengaluru FC. Amrinder had a great season this year, he had 10 clean sheets and played all the 23 games for the team. He was substituted only once during the Semi-Finals against FC Goa in the penalty shoot-out. He has 61 saves and has conceded 21 goals. In the 2017-18 campaign, he finished with 55 record saves, making it the most by any player in the league. 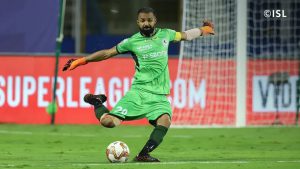 Arindam Bhattacharya is one of the most constant goalkeepers in the Hero ISL. He has been the robust wall over the years for ATKMB. After an astute display, he received the Golden Glove award this season. He played all the matches for ATK Mohun Bagan. He has 10 clean sheets under his name this season with 59 saves and has conceded 19 goals. 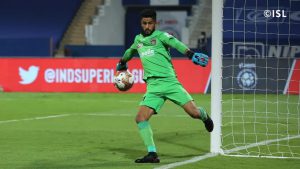 Vishal Kaith was one of the key players for Chennaiyin FC this season. Kaith played all 20 games for the team. He had 6 clean sheets under his belt and 68.91% of saves percentage. He has conceded 23 goals and has saved 51 goals for the team. 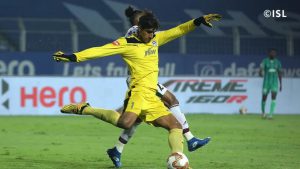 Gurpreet Singh Sandhu is one of the top-rated goalkeepers in India. He is the main wall for Bengaluru FC. This year he had a total of 4 clean sheets and had 58 saves. He conceded 25 goals and played all the matches for Bengaluru FC. He has 69. 87% of saves percentage. Alongside his multiple achievements, he became the first Indian to feature in a UEFA Europa League match starting the first leg of Stabaek’s Europa League First qualifying round tie against Connah’s Quay Nomads. He also played his first Norwegian Football Cup match on against 2nd division club Baerum SK, for Stabaek. 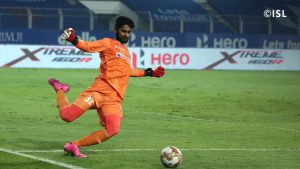 Albino Gomes has been a consistent performer for Kerala Blasters FC. With a total of 20 matches been played, he has a total of 58 saves and 3 clean sheets. He conceded 36 goals this season and has a 61.7% of saves percentage.