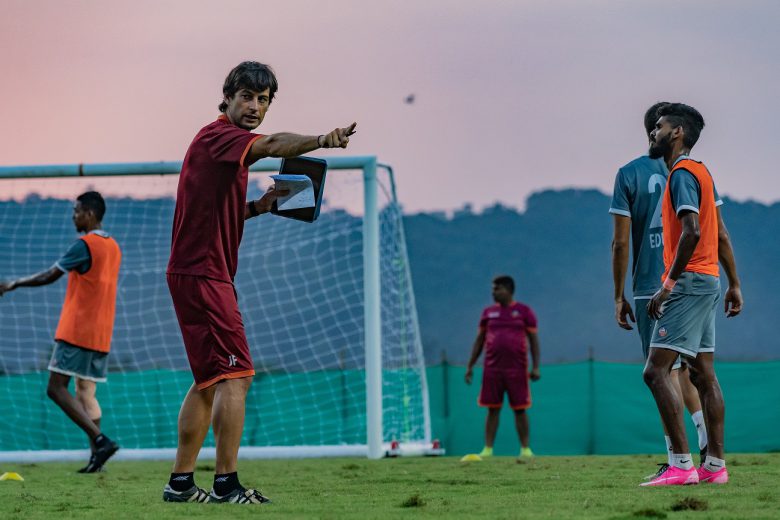 FC Goa announced their squad for the AFC Champions League on Thursday which included a total of four foreigners and 11 players from Goa. Juan Ferrando opened up to fcgoa.in in an exclusive interview to share the thought process that led him to select his squad of players.

How tough was selecting the final squad for the ACL?

JF: Obviously it has been a difficult process and needed me to make some very tough decisions. At FC Goa we have good footballers – both on a professional as well as personal level.

All of them have been working really hard and doing their best for the team over the season. Regarding the selection of foreign players from the ones I had to select from, I have nothing but praise for Ivan (Gonzalez), Igor (Angulo), Edu (Bedia), Jorge (Ortiz) and Alberto (Noguera).

I thank them for the good work and all their efforts over the last months, not only on the pitch but also helping everyone and have to highlight their commitment in helping the team improve every day.

With two foreigners in defensive positions, there seems to be an emphasis on fortifying the backline. Can you lead us through how you thought before coming to the decisions?

Half an hour before taking the final decision, I spoke to some players such as James Donachie, as he was not feeling fine over the last training session. I had one defender who was injured and another recovering after an injury. So I found myself with 3 players of defensive line with physical issues and had to decide to strengthen that area more as we will be playing 6 matches in just 20 days.

I then spoke to my players about the reasons why I took the decisions that I did. If all the players had been available and feeling fine, I would probably have taken a different decision but the reality is what I described. I had to think of the best for the team.

With only 4 foreign players in the team, it opens up an opportunity for a number of young Indians. What do you feel their attitude should be moving towards the competition?

From a methodological and learning process point of view, this is not the best option, but there is nothing we can do about it.

Now, what is important for them is to be mentally prepared and aware this is a huge opportunity that will probably require them to mature faster than expected personally and professionally.

How much better do you feel that you understand the team and the players now compared to the beggining of the season?

I always try to help the players improve with each passing day. And despite a great campaign in the ISL, I am aware that the team has still lots of room to improve a lot.

Our goals are still far. My mindset is not to think about what we have done so far but always to think of what is left to do to get closer to our goals.

Do you feel that with the temperatures rising, it will giveFCGoa an advantage as go into the tournament?

To be honest, I don’t think there are any advantages of any kind. In football, the Asian Champions League is one of the biggest international competitions together with the World Cup, the UEFA Champions League in Europe and the Copa Libertadores.

They are the most important competitions a club can play in, so motivation is key. I try to make everyone aware of the importance of that moment and the pride of being able to participate in such a competition.