Footballcounter went up and close with UK United’s captain and their owner after they recently lifted the Official 7’s tournament trophy in Delhi and won a trip to Istanbul, Turkey.

The Official 7’s was a tournament where you play 7v7 games. The tournament legs were played in Mumbai and Delhi, where the teams played league matches first, followed by knockouts. The top two teams from both the cities then get a chance to play the finale’s in Delhi, and UK United were the runners up in the Mumbai leg.

UK United faced arguably the best team in the league in the finale, the Goal Hunters. “We had a very tough opponent in the finals, named Goal Hunters, as they were very experienced and balanced with some good I-league players and also an ISL player. But this didn’t hamper our focus and dream to play in Istanbul, we were confident, and ultimately we got the result”, said team captain Shravan Shetty.

The final game was a very tight match where both the teams scored three goals till the end of the second half, and then in penalties, UK United won by 3-1. “I’m speechless, and I can’t describe this feeling. We have played and won a lot of tournaments over the years, but this one was extraordinary! We lost the Mumbai leg finals to Time Avenue, but we didn’t lose hope. We went to Delhi at our own expense and showed everyone what we are capable of,” said the UK United’s (Uncle’s Kitchen United) team owner Mr Ronnie Dsouza.

Mr Dsouza established this team 12 years ago, just became of his love for the sport. He also runs a restaurant in Mumbai named Uncle’s Kitchen since 1987. Talking about his team, he said, “I’m very lucky to have these bunch of players who are extremely talented, mannered and humble. I always believe that this team can win every tournament because the efforts they put in is tremendous! But winning or losing is just a part of the game; what matters personally is efforts.” 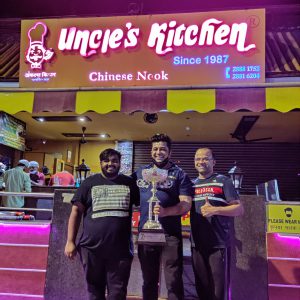 After winning the tournament, UK United gets a chance to go to Istanbul and play a league and friendlies with Turkish teams, a dream come true for the players and their owners. “International exposure is going to be a tremendous morale booster for the lads. It’s a dream come true for all of us to win this and go to Istanbul. We look forward to playing many more international tournaments if we get some good sponsors.”

The entire team, Mr Dsouza and the staff are excited about their upcoming tour to Istanbul and wish to continue their amazing winning streak!