“The aim is to qualify and gain promotion in the I-league”, says Kenkre FC Coach- Akhil Kothari 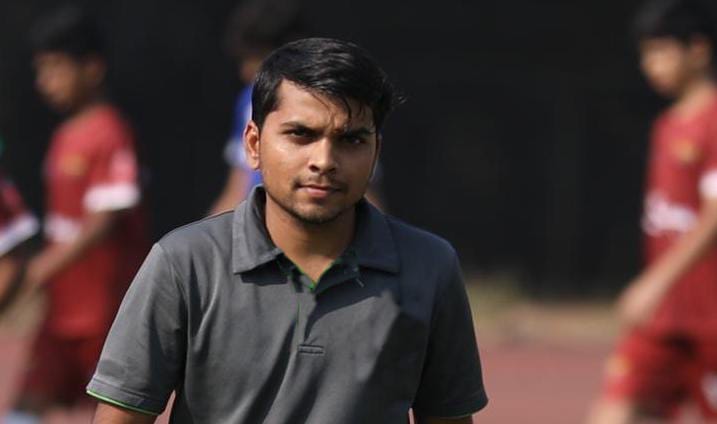 “We come from the region of Maharashtra, and we are trying to encourage maximum local talents. Even after the campaign ends, our efforts will continue at the same intensity to promote players from Maharashtra.”

Footballcounter went up and close with the young and dynamic coach of Kenkre FC, Mr Akhil Kothari. At the age of 25, Akhil is one of the youngest persons to coach a professional team and obtain an AFC ‘A’ Diploma in 2019. He began his coaching career at Kenkre FC by assisting Floyd Pinto in 2015.

Ahead of the upcoming Kenkre’s I league 2nd division Campaign, Coach Akhil Kotari talks about Kenkre’s comeback in the 2nd division after 3 years, their pre-season preparations amidst Covid-19 restrictions and future ambitions.

1. What are your thoughts about your team this season, and tell us about the new project Kenkre has this year?

Coach: This opportunity has come to the club after three years with a lot of consistent efforts both on and off the pitch. The last time we participated in the competition was in 2017, and we did qualify for the final round and missed out on qualification for the I-league. We have always encouraged players from Maharashtra. This time around, we have been unable to conduct open trials in the districts of Maharashtra due to several covid restrictions. Our team comprises a mix of local talent and talents from across the country. Our efforts post the campaign will continue at the same intensity to promote players from Maharashtra.

2. The season is round the corner; how are preparations going?

Coach: I want to thank the club management for bringing us all together in such difficult times to prepare for the qualifiers. The preparations so far have been good as we are working hard every day and training well. In a short pre-season camp, we have adopted a progressive training approach to prepare the players to compete in the qualifiers. We will be playing practice games against ISL teams to prepare well for the campaign.

3. How is the squad doing? How were the trials held, and are there any plans for foreign players?

Coach: We come from the region of Maharashtra, and we are trying to encourage maximum local talents. We have spotted talents from the state and are working with them to prepare them well for the qualifiers. This time we have promoted a lot of players from our system. With regards to foreign players, they are currently undergoing trials. We should be able to finalise them soon.

4. You have worked with state junior teams and Iron born FC. How is Kenkre FC’s management different?

Coach: I have come through Kenkre FC’s ranks as a player and a coach and was previously associated with the club for nine years. I was the assistant coach for the 2nd Division I league, the club’s last time in the competition. Kenkre have always tried to encourage homegrown people and will support them in getting better, let it be the player or a coach. The club has a lot on focus on youths since its inception.

5. Is there any expectation from you to finish top or gain promotion? Has the management given you any targets for this season?

Coach: The aim is to qualify and gain promotion in the I-league, which has been the target for us from day 1. As a group, we are working well to try and achieve our set target and make it happen this time around. As a club, we have previously featured in the competition and have always tried to work our way up through merit. A team from Maharashtra competing in the I-league will encourage local players, coaches and technical staff to showcase themselves rather than moving away from the state to seek an opportunity.

6. What are your future expectations with the team for the season ahead?

Coach: The expectations are always positive and progressive as we are a private club where the stakes are high as survival is always a challenge; keeping that in mind, our desire is always to compete at the highest level in Indian football.

7. Will Covid-19 restrictions play a significant role in the season ahead?

Coach: Yes, with covid restriction in Mumbai, preparations have been challenging, and at the same time, the team has undergone a lot of medical check-ups. But with no excuses, we will give our 100 percent in the competition.