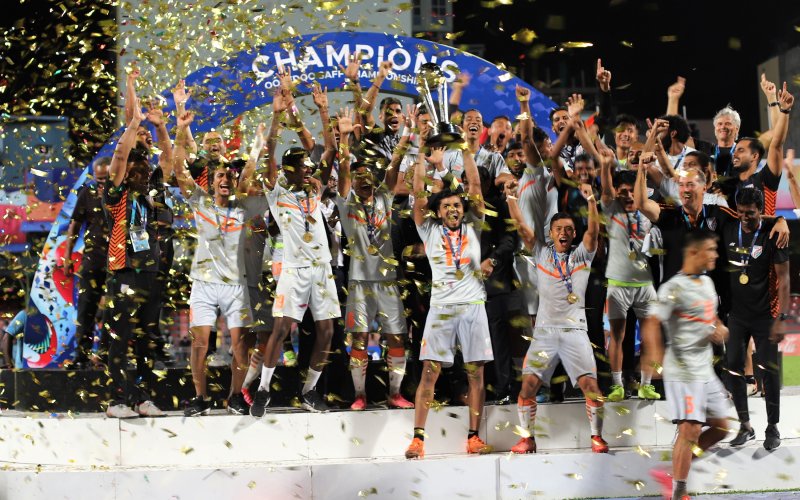 The morning after there’s satisfaction all around. There’s happiness, and that comes with a convincing reassurance of ticking the right boxes at the right time. Mission achieved, the Blue Tigers head home tonight to Bengaluru from where they would be moving onto their respective clubs for the Hero Indian Super League.

However, the U23 boys will stay back in the Garden City as the U23 squad flies to Dubai for the AFC U-23 Qualifiers on October 20.

There was a rousing reception at the team hotel late yesterday (October 16) night – all the Indian employees braving the rain, and having gathered at the jetty to welcome their heroes. Most of them had been regulars to cheer at the ground except the final. In fact, the rain and the strong wind prevented them from going to the ground to cheer – the turbulence in the sea, not allowing them to take the regular small boat which the authorities felt was ‘dangerous.’

The two babies in the team – Lalengmawia and Suresh Singh, the darling of their seniors, just haven’t been able to stop smiling overnight. “This is my first trophy win at the senior level. It’s a different feeling,” Lalengmawia maintained.

Meanwhile, Suresh Singh’s strike has still been the talking point, as much as Abdul Sahal’s strike. “I am proud of my son,” Gurpreet-‘paaji’ has been declaring every alternate minute. Gurpreet and Suresh share an excellent bonding among themselves, with the former referring to the talented midfielder as his ‘son.’

There’s also someone who hasn’t stopped smiling – Abdul Sahal. He immediately blushes when one reminds him of going on and on with the ball, and cutting in and in inside the box.

“Nothing much in it,” he tries in vain to dismiss it, even as Liston Colaco stands next, “That was indeed special.”

“We were doubted by all. We were written off by all after the first two games in which we drew. The character on display, the attitude, the determination of this talented side is amazing,” he quipped, as Liston hugged him from behind.

At almost every step, the Blue Tigers dedicated it to their two injured teammates – Farukh Choudhary, and Brandon Fernandes, who weren’t able to travel to the ground. Even as Mandar Rao Dessai and Glan Martins carried Brandon’s jersey with them, Rahul Bheke preferred to wear Farukh’s jersey even at the victory podium.

“Farukh and Brandon are very much here, and a part of this triumph. Their contribution in this Championship will never go unnoticed. I wore Farukh’s jersey as I wanted him to be with us during the trophy celebrations,” Bheke had to almost shout to make himself audible owing to the high decibel levels from the stands.

Most of them also demonstrated to the duo over a video call the celebratory mode of the team.

You turn to the Head Coach. He smiled. “The boys have done it,” is all he uttered. Stimac has been tireless all throughout the Championship, looking at every minute detail, fine tuning and adjusting the technicalities during the training sessions, thus prompting the performance graph to go higher, and higher.

Pritam Kotal, Subhasish Bose, Anirudh Thapa, Manvir Singh and all the rest were posing and clicking all throughout. “This is my second SAFF triumph,” Pritam declared. “Hopefully, more are to come. This will stay for long for us bouncing back after being dismissed by most after the first two matches.”

“We made it special as we were not so good in the first two games. It was tough from there to come up and play the way we did,” captain Sunil Chhetri averred. For the record, this is Sunil’s third triumph in the SAFF Championship as a player.

“Look at the youngsters – it feels good for all of them. It’s all due to their hard work – we were here for 20 days till the final, staying on an island, riding the waves every day for practice sessions, and matches,” Sunil went on. “Boss was here today,” he pointed to Assistant Coach Shanmugam Venkatesh. “He won it as a player, and now as a coach.”

Venkatesh, a former India captain, just smiled. “Stimac has been a huge guiding force. The manner the staff and players stuck together just shows the team spirit. Football is a team game, and we proved it,” Venkatesh opined.

“Congratulations,” quipped a young Dutch couple who are here on a honeymoon. “We watched it on television, and enjoyed it. The Cup is at our hotel – wow. But where is the trophy? You should have brought it to the breakfast table,” he said. “Good going, keep it up.”