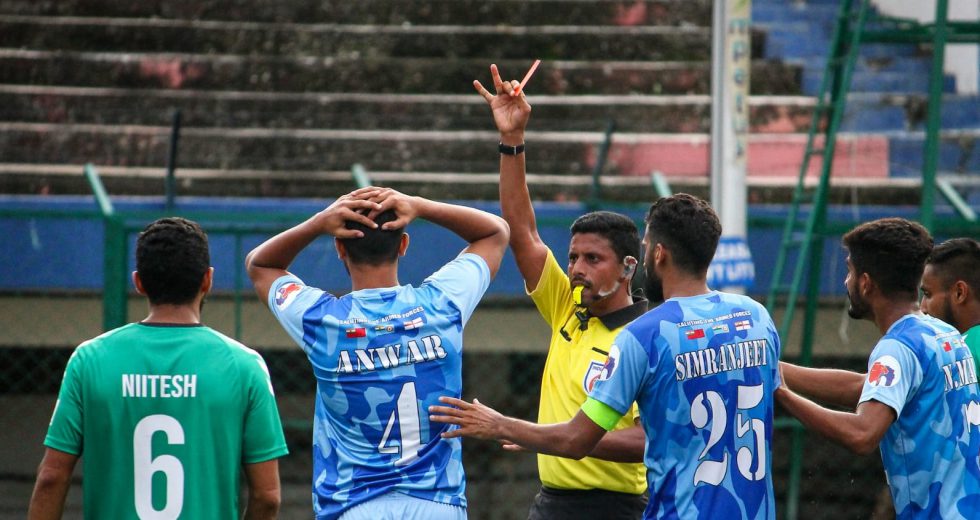 Anwar Ali was shown a direct Red card for a foul on Kenkre FC Goalkeeper during Delhi FC’s final group B game against Kenkre FC.

In the 82nd minute of the game against Kenkre FC, Delhi FC club captain Anwar Ali was sent off with a straight red card for a foul on goalkeeper Bishorjit Singh. Anwar had charged towards the Delhi custodian chasing a cross ball from the wings but as the ball was easily latched on by Singh, Anwar ended up barging into the Kenkre custodian but with both his hands straight into the face of the goalkeeper.

The referee had deemed the foul to be a direct Red card offence giving the defender his marching orders. However, the replay seems to suggest that the referee decision may have been a bit harsh on Delhi FC skipper. The result of which would have sen Delhi missing his service in their opening game of an all-important Final Round.

Also Read: Kenkre FC go down to Delhi FC 0-1 in a close encounter

However, Delhi FC raised their objection to AIFF disciplinary committee, coupled with fan furore on social media, The red card was overturned. The AIFF Disciplinary Committee revoked the suspension in their review and stated, “There was no deliberate intention on part of Anwar Ali either to Assualt or harm opponent Goalkeeper. He rushed for the ball and being pushed by the opponent defender, he bumped into goalkeeper with extended arms to balance himself. Such momentum act cannot be charged as ‘ Violent Conduct’ as held by the referee in a gross error of Judgement. A player could have been cautioned, nothing beyond the same.”

What do you think?? Watch the video yourself and make your own opinion

Ranjeet Bajaj thanked AIFF Disciplinary Committee in his tweet for the swift decision.

Kenkre FC go down to Delhi FC 0-1 in a close encounter
We are confident, but not overconfident, asserts Stimac ahead of final