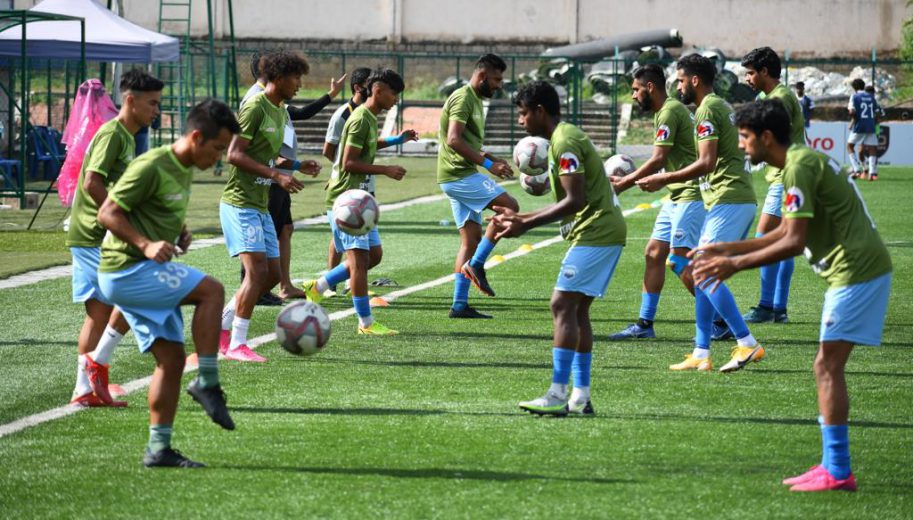 Rajasthan United FC is set to begin their final round of matches in the Hero I-League Qualifiers 2021 with a clash against the in-form Delhi FC here at the Bangalore Football Stadium on October 18 (Monday) at 3:45 PM IST.

Rajasthan United FC has qualified for the final round by virtue of obtaining 5 points from their three group stage matches, finishing in the second spot in their group, albeit with an identical record as their Group A counterparts Madan Maharaj FC. RUFC have remained winless in the campaign since their opening day win against Ryntih SC, which was followed by two draws from as many matches. However, head coach Vikrant Sharma insists that his team will set out to obtain all 3 points in their match against Delhi FC.

“All four teams remaining in this stage of the competition are really good and committed to winning the tournament. In a Round Robin format things can go down to the wire in terms of qualification, so it will be very important for us to begin the final round with a win tomorrow,” Vikrant Sharma said.

Assessing the quality of the competition in the final round, Vikrant said, “Each team has come out of a very tough group stage by overcoming high-quality opposition and playing good football, so each team has an equal chance of securing qualification I think. We believe we are in the mix as well, therefore we are staying positive at the moment.”

Rajasthan United winger Dilli Ram Sanyasi has consistently been an attacking outlet for his side and has impressed with his skillful individual displays throughout the group stage matches. Speaking about the team’s showing in the competition thus far, Dilli Ram said in the virtual pre-match press conference, “I am very happy with my team because everybody is committing 200% on the field and off the field as well. We are an extremely united group and that is very important in a team game. Secondly, I am happy with my own personal performance. I am giving everything to the team, and that has always been my outlook. I always give everything for any team I play for as I believe in being a good team player.”

Delhi FC will come into tomorrow’s match against RUFC as the form team of the Hero I-League Qualifiers so far, recording four wins from four matches and scoring 11 goals in the process. After chopping and changing the line-up in their final two group matches, head coach Surinder Singh is happy that he has had a chance to assess his whole squad’s performance and output on the field. Singh maintains that making changes to the starting line-up has been important as the matches have come thick and fast in the tournament, and he is confident in the abilities of his squad players who have duly lived up to the expectations of the head coach.

Sharing insight behind his selection criteria for tomorrow’s game against RUFC, Singh said, “We have great respect for Rajasthan United, who have reached the finals with a win and two draws. They are a difficult team to play against. We are expecting a tough physical battle tomorrow and we need to be ready for the challenge. At the same time, we have to be ready to impose our game plan and tactical plan for the game. We are fortunate to have the full squad available and everyone is well rested for tomorrow, so we will look to field a strong unit tomorrow.”

Delhi FC will also be able to call upon the services of club captain Anwar Ali, whose dismissal for a straight red card in a substitute appearance against Kenkre FC in the last group match has been overturned. Singh believes that the decision to rescind his captain’s red card comes as a boost to his team’s chances of doing well in the competition.

“Every team will always want their best player to be on the field. We have good backup players in every position, but when you have one of your most talented players available to play, it lifts the whole team’s morale as well. We appealed against his dismissal in the last game and were successful, so having Anwar back in the team is good news for all of us,” said Surinder Singh.

The head coach also cited the support of team owner Ranjit Bajaj as one of the primary reasons for the team’s recent success and a good run of form in the Hero I-League Qualifiers. He said, “Mr. Ranjit Bajaj’s support for the team has been nothing short of unreal. He works tirelessly and is always looking for the best for his team. He is a man with a great vision and his love for football is amazing. We need more and more people like him if we want to develop football in our country. He is a very good leader, and I love working with him.”