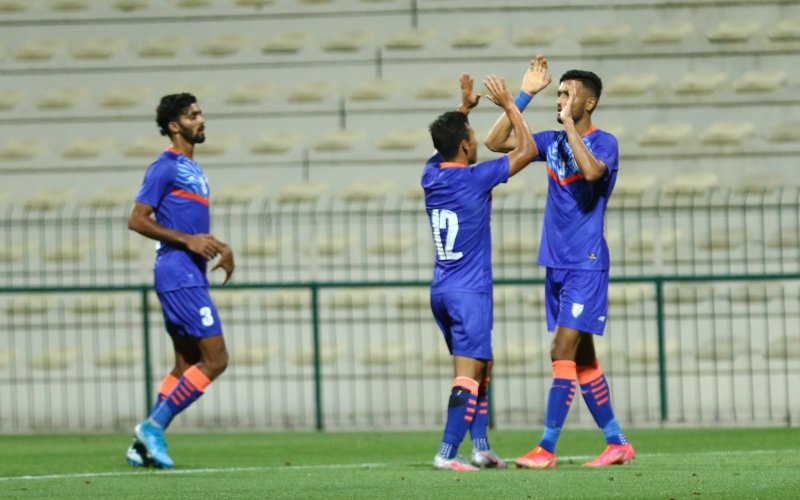 Manvir Singh and Amrinder Singh played crucial roles for the Blue Tigers in their return to International football after a gap of 492 days, as India were held to a 1-1 draw by Oman at the Maktoum Bin Rashid Stadium in Dubai, UAE, on Thursday (March 25).

Manvir Singh rose highest to nod in Bipin Singh’s cross in the second half, cancelling out a first-half strike by Oman. Amrinder had a stellar game, saving a penalty, and making numerous saves to deny the Omani forwards a second goal.

With 10 debuts, Igor Stimac became the Blue Tigers head coach to hand the most number of maiden International caps in a single match, in this century. Stephen Constantine, previously held this record, handing out seven debuts in India’s game against Nepal on March 12, 2015.

Despite the fact that Oman started off on the front foot, India got a couple of early chances, when a throw-in by Ashutosh Mehta from deep inside the Oman half found Manvir, whose shot on the turn was deflected out of play. Sandesh Jhingan got in a decent effort from the resulting Bipin Singh corner, but it was off target.

Around the quarter-hour mark, Oman had a good chance to take the lead when Amjad Al Harthi penetrated the India box from the right and sent in a low cross towards Abdullah Abdulghafur, but the latter’s effort was blocked thanks to a last-ditch tackle by Ashutosh Mehta.

Ashique Kuruniyan made a foray down the left in the 19th minute, and layed it off for Akash Mishra on the overlap. The young fullback sent in a cross aimed at Manvir Singh, but it was cleared by the Oman defence.

Oman captain Abdulaziz Maqbali was adjudged to have been brought down inside the Indian penalty area, as the referee pointed to the spot in the 26th minute. Abdulaziz stepped up to take the spot-kick, but India custodian Amrinder Singh dived to his right to make a fine save and keep India on level terms.

With a little over 10 minutes left of regulation time in the first half, Suresh Singh made a good interception in the Oman third and played Bipin Singh through into the box, but the forward ran into traffic as the danger was averted by the Oman defence.

Oman breached the Indian resistance in the 43rd minute, when Chinglensana Singh attempted to block a cross from the left by Al Akhbari. While the Indian defender managed to get a foot onto the cross, the deflection, in the melee, hit Amrinder and trickled over the Indian goal-line.

India tried to forge one final chance deep in the first half added time, when Manvir Singh nodded a long ball through for Bipin, who raced down the flank, but the Omani defence cleared it for an Indian throw. However, the referee brought an end to the first half as soon as it was lobbed back into play by Akash Mishra. Oman took the slender lead into the tunnel at the half-time break.

Oman came out with more intent in the second half, often making forays into the Blue Tigers’ third. However, the Igor Stimac-coached side struck back on the 55th minute, when Ashutosh Mehta made a clever interception in the opposition half, soared up the right wing, and played Bipin into the box. The latter lobbed in a cross aimed at Manvir Singh, who came up with a perfect header, nodding the ball into the ground and past the keeper, putting India on level terms.

A few minutes past the hour mark, Oman earned a free-kick in a dangerous position. Abdulghafur curled a fierce shot towards the top corner, but Amrinder pulled off another amazing save with an outstretched arm. The India custodian was in action again, when he palmed away another effort by Al Harthi on the near post.

In the 69th minute, Ashutosh broke free on the right flank once again, and fired in a cross for Manvir, but the striker’s header was off target.

As the clock wore down, India started to gain more control in the game, and looked to make forays in the Oman third. This was helped by the attacking chances made by Stimac in the final quarter of an hour, bringing on the likes of Ishan Pandita and Lallianzuala Chhangte.

However, the referee soon brought the match to an end, as India and Oman shared the spoils.