Lord Buddha’s calm has influenced me a lot: Akash Mishra NEW DELHI: Born in a family of farmers, Akash Mishra’s call-up to the Indian Senior National Team camp has been celebrated like anything at his village Balarampur, Uttar Pradesh. In a candid chat, Mishra opens up about his journey so far, Lord Gautama Buddha’s influence on his life, the “best version” National Team, Stimac as a person, learnings at Indian Arrows, facilities at Odisha Sports and much more. EXCERPTS:

How has the experience in the camp been so far?

The National Team camp is entirely different from a club set-up. It’s the next level.

What do you mean by that?

The National Team is the best version of any country. The best in our country of 1.4 billion are called for the National Team camp. The better ones will get into the final 23 and after that. It’s a mad rush for the XI amongst all – it’s extreme, but it’s also a healthy competition.

Even in a normal practice session, you need to give more than 100 per cent. Otherwise, someone else will replace you. This is not a club where you are on a contract. This spot needs to be earned, and sustaining it is like an impossible task. And when you are surrounded by experienced players who are better than you, your footballing education improves.

Who has been the biggest influence in your life so far?

(After a brief silence) Every time I have been to Shravasti, I discover something within me. I am moved. Lord Gautama Buddha had spent many years in Shravasti. His teachings are all over the place. You experience a unique feeling when you are there. There’s peace all over. In that sense, you can say Lord Buddha’s calm has influenced me a lot.

How many times have you been there?

Shravasti is a 20-minute drive from my village. Every kid’s first school trip from our village is to Sravasti. And why not? I have lost count by now as to how many times I have been there.

Akash then quips back asking: “Have you been there? If you haven’t, you need to visit it next time,” he urges. 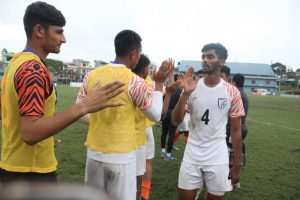 You have represented the U-19 National team before…

I have been lucky to played against U-19 teams of France, Slovenia and Croatia amongst others. They were far superior. In fact, I felt they were much stronger than the Hero I-League teams where I was playing at that time. Their physical prowess, and their ability with the ball stood out.

They are just so confident on the ball. It’s not that we are lacking in confidence. But we faltered at times. They didn’t. That was a big lesson for our entire batch, which we worked upon while playing for the Indian Arrows.

How special was Indian Arrows for you?

If Indian Arrows hadn’t happened to me, I wouldn’t have got to Hyderabad FC, and subsequently the National team squad. And it’s not just me. You ask any of my former teammates, they won’t even blink an eye while speaking about the Arrows. All the finer aspects of the game and taking that step towards professional football – we learnt at Arrows.

Can you give an example?

Off the ball play was stressed upon very strictly. In a match, it’s not always that you will have the ball. And when we were at the Arrows, our opponents enjoyed more possession than us. So what do you do then?

You will hear from many that during those moments, you need to run. But it is not just about running. During those situations, you need to be working on your positioning, and being compact, along with your running. But excessive running will make you tired. Mentally, you need to be in sync with the physical work which you are executing on the field.

But it’s so easy to say. Once Igor Stimac had come to watch us play at Indian Arrows, and we faltered on that day (smiles and chuckles). 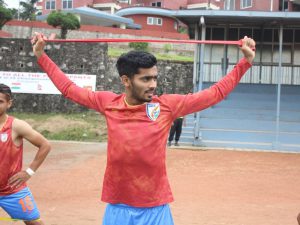 How have you seen him at the camp?

He is very patient and understanding. He stresses on technical play. I look up to him. I have never seen him hassled or angry. He is so cool in every situation – an aspect which we need to bring into our lives even at the personal level.

Midway into the Hero Indian Super League season, did you ever feel that you may get a call up to the camp?

I didn’t think much. I had made a start and didn’t want to spoil it by contemplating too much about a call that wasn’t in my hand. I knew that at the stage if I started to relate everything to the National team my performance for my club may suffer.

And I kept on repeating to myself not to ever exert in my eagerness to impress. I am grateful to get very able guidance from Subrata-da (Paul), Adil-bhai (Khan) and Hali-bhai (Halicharan Narzary), and obviously my club coach Manolo Marquez.

People speak very highly about Odisha Sports’ facilities in Bhubaneswar. What are your thoughts?

We practiced under the floodlights – mind you, an U-19 team. Where in India will you get that? But we are lucky we got that in Odisha. Most significantly we didn’t have any fixed time slot. We could slot it at our own convenience.

Everyone was so willing to help. The campus itself was so magnificent. You don’t get such facilities anywhere in India.

When and how did you start playing football?

I didn’t start with football. Rather, like most Indian kids, I started with cricket. I used to be a spinner and had made quite a name for myself in inter-village cricket. But with so many kids in practice, I just waited for my turn to come, and was growing restless. It so happened that one day my cousin brother brought in a football. I felt a certain kind of elation every time I kicked the ball. That changed my ambition. I was just 11.