In a conversation with the eye-catching midfielder from Mumbai- Azza Noorani, he opens up about his recent campaign with Kenkre, some facts about Mumbai football and much more.

After impressing everyone in the MDFA, Mumbaikar Azza Noorani displayed his skills in the I-League Qualifiers 2021 when he played for Kenkre FC, a team from his home city.

Azza started playing for Kenkre after he gave trials for them in September. “In September, they began their trials, where all the coaches were experienced and gave personal attention to every prospective player. The trials lasted for two weeks. It was a great experience also because I got selected,” said Azza.

With the Covid-19 restrictions in Mumbai, Kenkre’s team was assembled only a month before the qualifiers. The team was led by India’s youngest ‘A’ licensed coach Mr Akhil Kothari. Azza has played under many experienced and well-known coaches before Kenkre’s stint. On that, he said, “He is young, but he is dynamic and fearless. It was a pleasure to play under him, and I personally enjoyed it a lot.”

Azza became a vital cog in Kenkre’s squad this season, where he started all 7 games and performed exceptionally in every one of them. He also scored a fantastic goal against ARA FC, where Kenkre won by 2-1. “I have worked hard to play for Kenkre, and I think I performed well because I gave it my all. It was a proud moment for me that I got to start every match.” 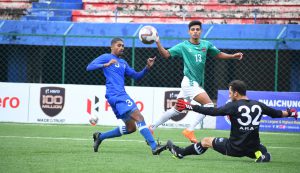 Kenkre missed out on the title after they drew the must-win decider game against Rajasthan United, who went on to lift the trophy and qualify for the I-League. “It’s unfortunate that we missed out on this great opportunity. but I guess we will definitely come back much stronger and better.”

The Mumbaikar started his career with Carmelites SC, a local club from Mumbai that played in different Bandra leagues. After that, Azza never looked back, and he went on to play for Mumbai City FC juniors, then PIFA Colaba, where he had his first exposure to the top tier of Mumbai football. After his stint with PIFA, he was picked up by KSA, who represented in the MDFA elite division. Then finally, he was a part of Air India in 2019, which lifted the MDFA Nadkarni Trophy.

Speaking about Mumbai football, Azza said, “We have a huge number of talent in Mumbai, who all need a platform to showcase it. I think Kenkre is doing a great job to help the local players, which can make a big difference for all the Mumbaikars. I wish we could have got that I-league spot, and then the story would have been different altogether, but it’s ok, there’s a lot to come in future.”

Azza dreams of playing for the national side one day, which is his and his parents biggest dream. To conclude, Azza thanked all the team members, staff, coach of Kenkre FC for the recent eventful campaign and also his family and friends who have supported him until date.

I want our boys to enjoy their football: Igor Stimac
Fast, exciting and technical – welcome to Hero Futsal Club Championship