Founded in 2000, under the patronage of former national-level footballer and coach Mr. Adib Kenkre, Kenkre FC has become a known entity for Football in Mumbai since its inception.

The community-based club has the vision to promote youth and local footballers. And this time too, Kenkre FC went with their majority home-grown player philosophy to give local players a shot to represent the club at the national level. The club had as many as 22 players from Maharashtra in a squad of 29 players.

While most teams in the qualifiers comprised of at least 2 foreigners in the squad, Kenkre FC roped in just one in Cameroonian defender Zacharie Mbenda. Kenkre FC also had 13 players from their own Academy in the senior team setup. Barring Siddharth Colaco, who unfortunately suffered an injury during training, and Goalkeeper Aayush Shah, who had two experienced keepers ahead of him, all other academy players got valuable game time during the campaign.

Defenders Nitesh Aswani and left-back Shaun Fernandes were fielded against Delhi FC and put in some good defensive shift to keep the scoreline 1-0 against a strong Delhi strike force. Substitute Arya Gandharva aged 18 years too made his appearance in the game. But it was midfielder Aravindraj Rajan, who had started almost all games, who turned out to be one of the standout players of the tournament.

With Covid 19 restriction in Mumbai, preparations for the campaign were challenging. With a team assembled just a month before the tournament and banking on India’s youngest ‘A’ licensed coach Mr.Akhil Kothari, Kenkre FC went with a short preseason in Hyderabad before the start of the Hero I-League qualifiers campaign in Bangalore. A positive performance in preseason friendlies where they gave a tough fight to ISL outfit Hyderabad FC showed signs of Kenkre FC’s capability. Going into the tournament, Kenkre FC were considered more of a dark horse among the title challengers.

The tournament was divided into two groups, Group A comprised of 4 teams and Group B with 5 teams, with Group B having to play 1 additional game. Kenkre FC were placed in a tough group B alongside tournament favorites Delhi FC and Kerala United, the group also had former I-League 2nd Division outfit ARA FC and Uttarkhand’s Corbett FC. Kenkre FC started off their campaign against Kerala United FC, where they went a goal down early in the 2nd half before staging a brilliant comeback to pocket all three points. The win set the tone for the rest of their campaign as Kenkre FC followed it up with another 2-1 win over ARA FC. 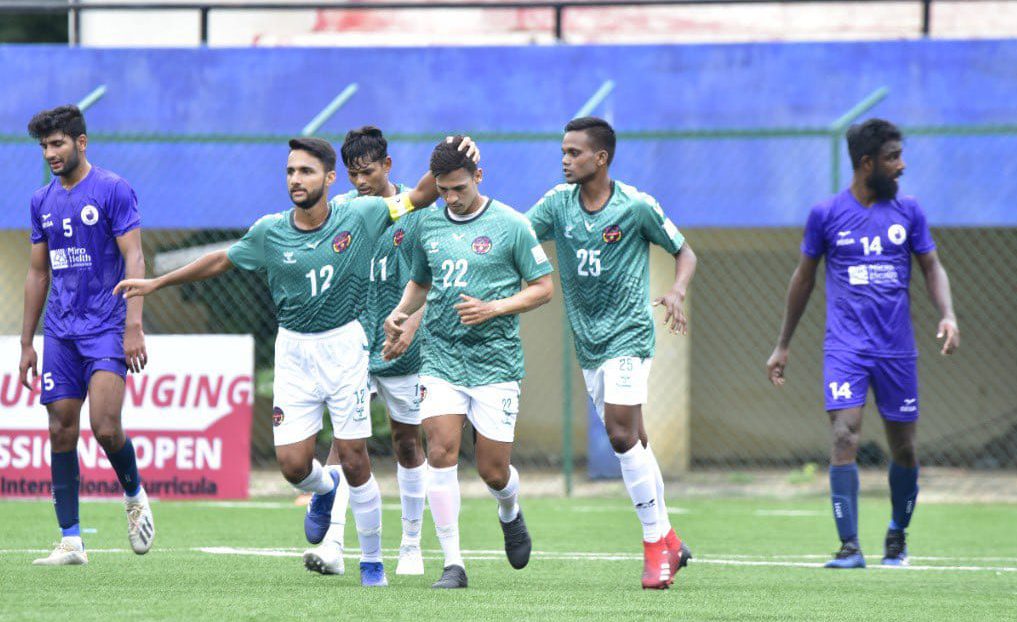 Against Corbett FC, Kenkre FC created multiple chances throughout the game but failed to convert, hitting the post couple of times in the process. However, the draw secured Kenkre FC a spot in the final round. As a result, Coach Akhil went with wholesale changes for the final round fixture against title favorites Delhi FC. The Anwar Ali-led side with the likes of Sergio Barbosa and Willis Plaza in the attack had been on a rampage scoring 10 goals in 3 games coming into the final group match.

Kenkre took time to get into a rhythm with 11 changes in the squad as Delhi took the lead two minutes into the game. Kenkre soon settled down fashioning few chances of their own. However, the match ended at a close 1-0 scoreline as Delhi and Kenkre entered the final round to meet Madan Maharaj and Rajasthan United for the final leg of the tournament.

Kenkre FC started off the final round with a 1-0 win over Madan Maharaj FC courtesy of Pravitto Raju’s goal. In the next game against Delhi FC, Kiran Pandre’s goal was not sufficient enough as Delhi sneaked in a point courtesy of a late penalty. In the final game of the tournament, the odds favored Rajasthan United, a team unbeaten throughout the tournament and needing just a draw to qualify for the I-League. And while Kenkre did dominate possession and even opened up their defenses quite a few times, the final finishing touch evaded them as the game ended goalless for both teams, much to the heartbreak of the Mumbai team. 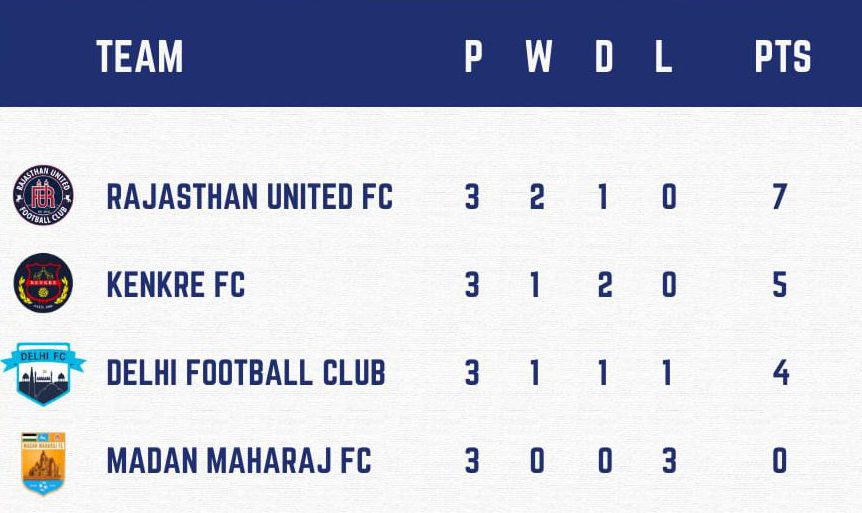 Stars of the campaign:

Kenkre FC had 6 different goal scorers, banking majorly on their strong defensive setup and fast-paced wingers. Coach Akhil’s tactics against each opponent looked spot-on as the team combined well with a series of short passes, ball possession, and wing play.

Goalkeeper Tenzin Samdup was one of the standout keepers of the tournament with 3 clean sheets in the campaign. Cameroonian Zacharie Mbenda alongside Captain Al Azhar Delhiwala, Suraj Negi, and Tarif Akhand held the defensive fort strong conceding just 4 goals in the entire campaign.  Kiran Pandre and Aravindraj Rajan marshaled the midfield well while the fast pace and crosses from the wingers Azza Noorani,  Varun Mathur, and Rinaldo Fernandes were a constant threat to the opposition defense.

Coach Akhil’s decision to deploy Pravitto Raju as the attacking midfielder was a fine tactic too as he created several chances and was a constant threat with his ability to find open spaces. The 24-year-old former Chennai City midfielder was awarded Man of the Match twice during the campaign. In the spotlight, strikers Ranjeet Pandre and Yash Mhatre kept opposition defense on their toes when in their moments of play. Others like, experienced midfielder Lester Fernandez had a calming presence in the midfield whenever he was brought on.

While Kenkre would regret this missed opportunity to become champions of I league Qualifiers, their performance at this level should be a welcome boost for Mumbai football which has gone dormant in the last couple of years primarily due to covid but also due to lack of enough exposure for local players at national leagues.

Kenkre FC’s participation as representatives of Maharashtra at the Hero I-league qualifiers has put Mumbai football on a pedestal. The upcoming Mumbai Football League will experience exciting young talent with Kenkre FC’s young players on display.