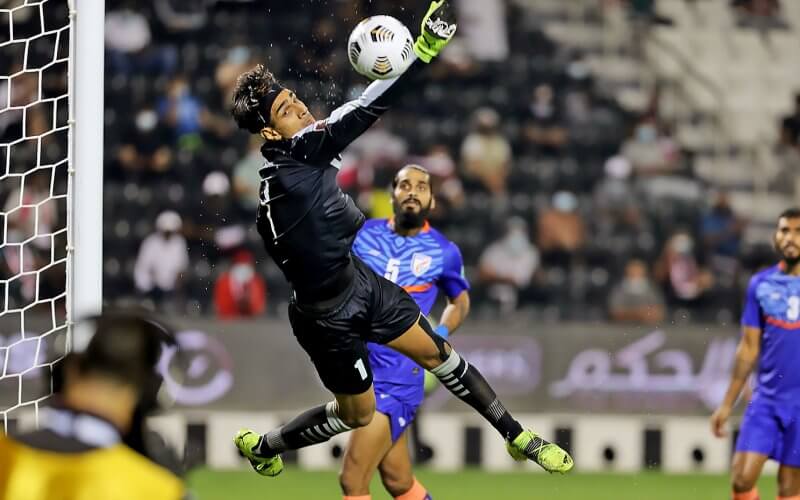 With sweat dripping all over, his bandana seemingly disheveled from keeping his hair in check for 90 minutes, Gurpreet Singh Sandhu, all tall and majestic, sipping water, headed back to the dressing room.

Abdelkarim Hassan, Qatar’s world class wing-back came up, and patted Gurpreet. “You should be playing in the Premier League – you are good enough. What are you doing here?” Abdelkarim, who had been foiled time and again by Gurpreet during the match, rhetorically asked. There were smiles all around.

But it came with a warning. “The next time we play again, I will score past you,” he quipped.

“I will do my job,” Gurpreet smiled back.

“Great job man. You are too good,” Abdelkarim waved, and made his way to his dressing room.

“I have had good outings. But I’ve never had an opposition team player come to me and say that I am good enough to play in a big league. That’s a huge compliment,” Gurpreet murmured.

The love-affair of Indian goalkeepers at the magnificent Jassim Bin Hamad Stadium, Doha continues. It was here that in 2011 in the AFC Asian Cup Qatar 2011 that Subrata Paul’s heroics earned him the nickname ‘Spiderman’. And it was here that in September 2019, Gurpreet led from the front to thwart Qatar without conceding any.

A trip down the memory lane will make you remember that in 2011, it was Mark Schwarzer, the then Australian National Team goalkeeper, playing for Fulham who had knocked at the Indian team’s dressing room to meet Subrata and eventually exchange jerseys, an appreciation to Subrata’s performance on that day.

“We generated around 25 shots in the match and the goalkeeper played a great game once again. He was very good under the bar and made a huge difference. The next time we play again, we will not allow him to be at his best,” Sanchez’s appreciation came for Gurpreet.

“I didn’t count the number of saves. But I feel it was more than the last time. We played with 10-men for most part of the match. But we had our chances too,” Gurpreet opined. “Against such quality opposition like Qatar such chances come very rare. We need to take them.”

Back in Kolkata, ‘Spiderman’ Subrata Paul laughed when reminded about his exploits in the 2011 Asian Cup at the same ground. “That was a decade back,” he quipped. “I need to hug Gurpreet for the manner in which he came out with such flying colours. When a rival team is attacking relentlessly, it’s easy to lose concentration for that split second. But he is my special boy,” maintained the ‘Spiderman’. “In fact, the fighting spirit on display by the entire squad is commendable. Everyone played their hearts out.”

Meanwhile, the morning after, the boys gear up for the next challenge – Bangladesh. The morning screening process is on and the squad will be split into two batches for the recovery sessions. Right from debutant Glan Martins to Suresh Singh to Abdul Sahal to Lallianzuala Chhangte to Manvir Singh and all the rest – the Blue Tigers stay united, and focussed.

‘Ironman’ Sandesh Jhingan, fearless as ever on the field, immune to taking blows all over, expressed that “we need to remember that despite all the fight put up by 10-men, we couldn’t garner a point”.

“Life in football is harsh. We still haven’t opened our account in Doha. We need to focus on the next one and then the next one,” he expressed.

India’s next opponents Bangladesh put up a spirited display against Afghanistan, coming back from behind to pull off a 1-1 draw. India play the Bangla Tigers next on June 7.

From onions to the ISL, Saviour Gama has slid his way to the top
‘Qatar is past,’ Blue Tigers shift focus to Bangladesh match