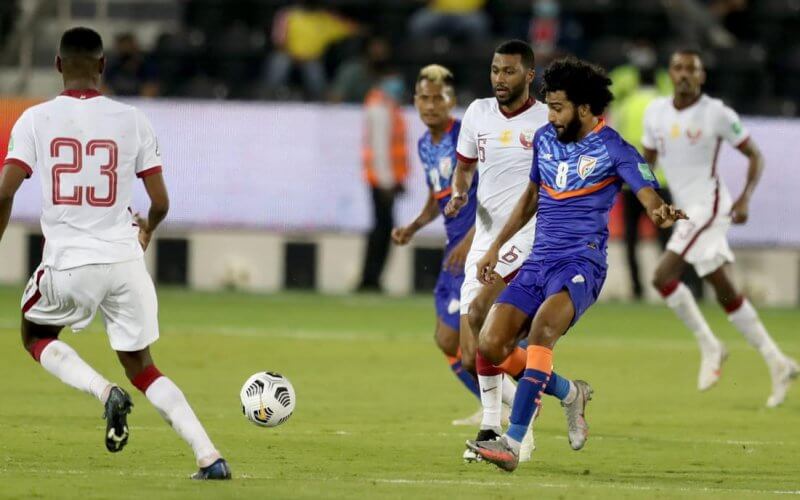 A dominant Qatar beat a 10-man India 1-0 in the FIFA World Cup Qatar 2022, and AFC Asian Cup China 2023 preliminary joint round 2 qualification at the Jassim Bin Hamad Stadium, in Doha. Qatar led 1-0 at half-time, Abdel Aziz Hatim making the difference between the two sides, slotting in a 34th minute winner.

The last time the two teams met in September 2019, India had held the Asian champions to a goalless draw. Courtesy the result, India stay on three points from six matches, while Qatar sit pretty on top of Group E with 19 points from seven matches.

Qatar, as they are wont to, played it amongst themselves right from the kick-off in their effort to find spaces through the Indian midfield. They earned their first corner in the second minute but the shot from Abdelkarim Hassan sailed over.

The very next minute, the Asian champions had their first shy at the Indian goal but Gurpreet Singh Sandhu dived low to his right to collect Abdel Aziz Hatim’s grounder.

The Blue Tigers did sniff a counter in the seventh minute when Manvir Singh latched on to a loose ball and laid off it for Bipin Singh on the left flank, but the latter was not able to find anybody with his cross.

The first yellow card of the evening was flashed to Rahul Bheke on the eighth minute for a tackle on rival captain Hassal Al Haydos. 10 minutes later, the impact was larger – Bheke was given marching orders after receiving his second yellow card of the match for a handball offence. The resultant vicious curler from Haydos was punched away by Gurpreet.

In between Sunil did chest a long ball in the 11th minute but was shielded by Musaab Khidir even as he acrobatically tried to have a connect. Manvir did manage collect it and tried to make an inroad, but was thwarted.

With India down to 10 men, Qatar’s domination further increased. Suresh Singh moved into the vacant slot left over after Bheke was red-carded, and the youngster stuck to the basics, pressing hard and was not overawed, given the fact that he was fighting it out with the two of the best from the continent – Al Haydos and AbdelKarim.

India had their first real chance in the 29th minute when Ashique Kuruniyan managed to slip past his marker and essayed it behind the defensive line for an onrushing Manvir. But the striker’s touch let him down from what was a clear chance for India.

Five minutes later, Qatar surged into the lead. Abdelkarim found Almoez Ali inside the box, who turned and laid it off for Abdel Aziz. The jungle of legs didn’t allow the latter to have a clear shot on goal, but he being allowed the luxury of that that extra split second, Abdel Aziz managed to send it past Gurpreet.

Qatar dominated, India pressed and kept it compact. A counter on the 42nd minute, however, almost led to the equaliser. Sunil, with all his experience, shielded Bassam Alrawi as he found Manvir. The lanky forward, sidestepped, went on the outside, and then swivelled the other way to open up a left footer, but this shot was blocked by a melee of Qatari legs.

The Blue Tigers had a close shave in added time, this time Gurpreet keeping AbdelKarim at bay, as Qatar headed into the interval with a solitary goal lead. However, it didn’t end on a sweet note for India in the first half, as Head Coach Igor Stimac was flashed a yellow card.

Changing over, Udanta Singh came in for Sunil Chhetri, the armband being worn by Sandesh Jhingan. And almost immediately after, Gurpreet had to be at his best to thwart Abdel Karim from point-blank range.

Six minutes later, he palmed away a snap shot off Mohammed Muntari who with a swift turn had foxed everyone in the box.

There was no doubting Qatar’s total dominance, and they earned a barrage of corners during the phase but they couldn’t create the impact they intended to.

Meanwhile, Gurpreet’s heroics continued. His physical presence, those big hands, reflexes and attitude as he fisted, punched, and even used his legs to maximum effect to thwart Qatar.

In the 68th minute, Lalengmawia ‘Apuia’ Ralte replaced debutant Glan Martins, and then in the 75th minute Akash Misra came in for Bipin Singh. Apuia was calm and kept moving into the vacant spaces to provide support whenever India had possession. One such occasion came in the 76th minute when Apuia and Akash played a one-two and laid it for Ashique. But the latter couldn’t keep it in the slot for either Udanta or Manvir – the rival defence intercepting it.

The next minute, Almoez Ali was yellow carded for bringing down Suresh Singh from behind.

Stimac introduced a double substitution in the 84th minute, Abdul Sahal coming in for Ashique and Liston Colaco replacing Suresh.

Qatar had their best chance of the second half with about four minutes of regulation time left on the clock, when substitute Abdullah Alahraq rifled a long-ranger onto the near post. However, the ball ricocheted and went out of play. Sandesh Jhingan made a one last effort to launch a counter for India in injury time as he charged down the pitch and tried to play Manvir Through on goal. However, a last-ditch tackle by the Qatari defence meant that the match ended in the latter’s favour.

India vs Qatar: All you need to know about this FIFA World Cup Qualifying match
From onions to the ISL, Saviour Gama has slid his way to the top