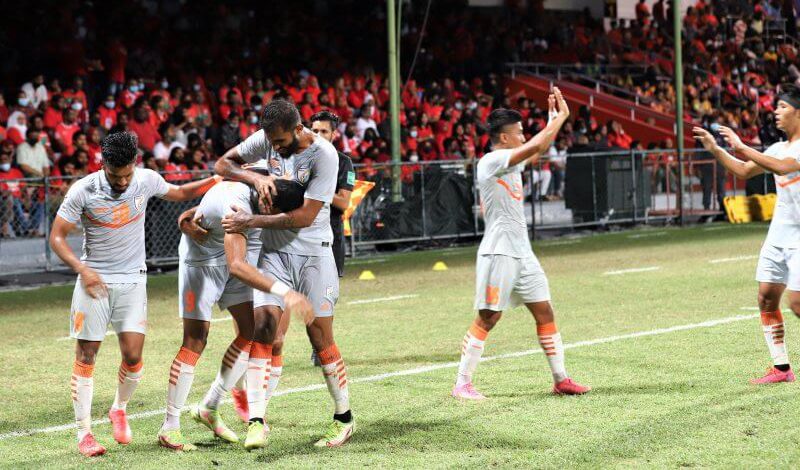 India defeated Maldives 3-1 at the National Football Stadium in Male, Maldives, on Wednesday, October 13, to book their spot in the 2021 SAFF Championship Final.

Manvir Singh scored the opening goal, while Sunil Chhetri netted a second-half brace, to hand India the three points. Maldives striker Ali Ashfaq scored from the spot in the first half, and was the only scorer for the hosts. With this win, India have now booked themselves a spot in the 2021 SAFF Championship Final, against Nepal on Saturday, October 16.

It was a frantic start to the match in front of a partisan crowd that showed its support for the home side. India skipper Chhetri was alert to chances and started chasing the Maldives defenders from early on. He nearly created an opportunity with the pressure, as he won a tackle before Suresh picked up a loose ball and was fouled outside the box. The resulting free-kick, however, crashed into the Maldives wall and was soon cleared.

Maldives talismanic striker Ali Ashfaq was also looking for opportunities of his own, and was soon charged at the Indian penalty area, but was closed down by Rahul Bheke. A little after the quarter-hour mark, Yasir took up a dangerous position and crossed it on from the right, but it was cleared for a corner. The resulting corner from Brandon took a bounce inside the box before Kotal headed it towards Chhetri. The India captain went for the jugular, as he attempted a back-volley, which was off target.

As the match neared the half-hour mark, Chhetri came close to scoring again, as he managed to get a powerful header off a Brandon free-kick. Agonizingly, though, for the Blue Tigers, the header thudded off the cross-bar. Soon after, Ali Ashfaq almost created a chance at the other end, as he burst into India’s defensive third. Subhasish Bose, however, was alert to the danger and put his body on the line to block Ashfaq’s shot.

It was Manvir Singh, on the 33rd minute, who broke the deadlock when he was played in behind the Maldivian defense by Brandon, as he smashed it between keeper Mohamed Faisal and the near post, as the ball whizzed into the top corner. With five minutes of regulation time left in the first half, Subhasish could have doubled the lead as he nodded it towards goal, but the ball was lapped up by the Maldivian keeper.

On the 45th minute, Pritam Kotal was penalized for a foul inside the box, as the referee pointed to the spot. Maldives talisman Ali Ashfaq converted the penalty to put the hosts back on level terms at half-time. India came out with much gusto after the changeover. Brandon sustained an injury five minutes into the second half and was replaced by Udanta Singh, as Lalengmawia took over the chief playmaking responsibilities.

Chhetri had a serious crack at goal near the hour mark when a string of passes between Chinglensana, Lalengmawia, and Suresh ended up with the Indian skipper, whose shot went over. Minutes later, it was Lalengmawia again, who played in a cross for Manvir. The lanky forward chested the ball into the path of Chhetri, who blasted it into the back of the net, to put India back in the lead.

Maldives immediately went looking for the second equalizer of the night and earned a free kick at the edge of the Indian penalty box. Ashfaq had struck the free-kick to go over the wall and dip as it neared the goal, but Gurpreet stepped in with an outstretched arm and tipped it over the bar.

Sunil Chhetri gave India the two-goal cushion in the 71st minute, when another aerial ball by Lalengmawia into the box was headed by the India skipper. His header looped over Mohamed Faisal and into the net. India gaffer Igor Stimac rang in the changes soon enough, with Rahim Ali, Glan Martins, and Anirudh Thapa replacing Manvir Singh, Sunil Chhetri, and Md Yasir, respectively.

The India head coach was soon given his marching order by the referee for a second yellow card. With the clock running down, Thapa had a late crack on goal in the last minute of regulation time, off an Udanta cross. However, the angle was too narrow, and the ball nestled into the side-netting.

With a minute of injury time left on the clock, Subhasish Bose was also given his marching orders for a second bookable offense, before the referee finally brought the match to an end, as India made it to the final of the SAFF Championship 2021.