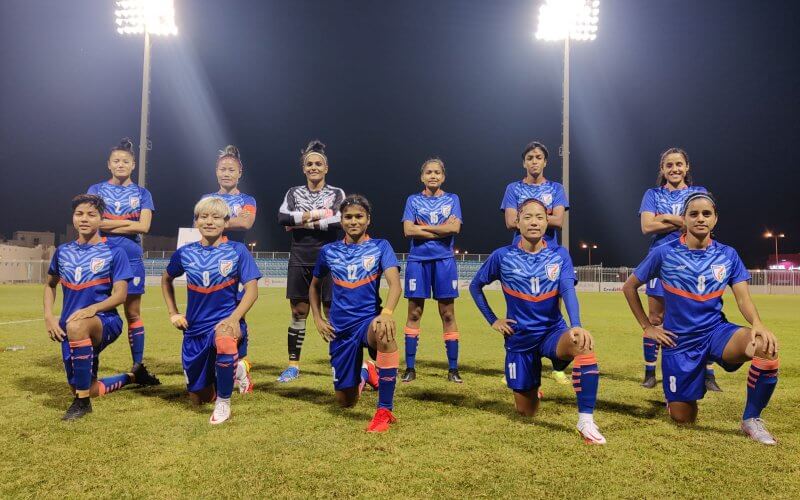 The India Women’s Senior National Team’s spectacular run continued as they secured a 1-0 victory over Chinese Taipei at the Hamad Town Stadium in Bahrain on Wednesday (October 13, 2021).

Renu’s early strike was enough for the girls to secure this win, which came after the 5-0 drubbing over Bahrain three days before.

Before the opposition, who are currently ranked 40th in the FIFA Rankings, could settle into the game, a sudden strike by Renu gave India the early lead and remained the only goal of the match. Five minutes later, Renu could have doubled the lead, but she was ruled offside before she could make effective contact with the cross by Dalima.

Chinese Taipei midfielder Ting Chi almost leveled the score, only to be denied by Aditi Chauhan under the woodwork in the 17th minute. Her compatriot Su Yu-Hsuan was also denied by the Indian goalkeeper on the cusp of the half-hour mark before India went to the changing room with the narrow lead.

Nine minutes after the resumption, Indumathi struck the target, but she was ruled offside, and the score remained unchanged. The prolific midfielder Lee Hsiu-Chin tried her luck from close range before the hour-mark, but Aditi stood tall to deny her confidently.

Chen Yen-Ping had the final effort for Chinese Taipei in the final minute of the regulation time but her effort landed safely into Aditi’s gloves. The match soon came to an end, and the Indian Women’s Team earned their third victory in four friendly matches under new head coach Thomas Dennerby.

List of probable for India U-23 AFC Qualifiers announced
Kenkre, Delhi face off in battle for pole position