Blistering through the midfield and making the defenders run for their life, there you find Techi, a phenomenal striker making her mark in the WIFA Women’s Football League 2021.

“My dream is to see myself playing for the Indian National Team” quotes Techi Akung, a young and dynamic footballer from Arunachal Pradesh. Just like millions of Indians, Techi came down to the City of Dreams to pursue her ambition.

Techi’s first encounter with football was back in 2016 when she was picked from her school team to represent the Arunachal Pradesh State Football Team at the Senior Women’s National Football Championship in Punjab. Having flared well in the competition, Techi received motivation from her parents and coaches to pursue the game professionally. 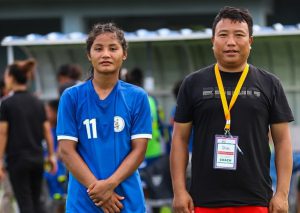 Back in Arunachal Pradesh, the difficulties to find the right platform and the guidance to make a career in Women’s football put her in dilemma, but Techi always looked to procure opportunities.

It was until 2019 when Techi finally received a call up to Mumbai after being spotted by Kenkre FC scouts up in the valley. Techi represented the team in the Indian Women’s League on 2019-20 and Indian Women’s League West Zone Qualifiers this year and immediately made an impact amongst her counterparts.

She returned to her hometown on 7th April, after the league got postponed indefinitely in light of the spike in COVID-19 cases. However, before returning, her heroics in the match against Next Sports Academy, where she also scripted a hat-trick, remains her motivation to be back on field very soon.

When asked about the postponement, “I support the league getting postponed. Precaution is better than cure and we have to fight against this deadly COVID-19 virus. I’m convinced that once matters fall in place, I’ll be back and put forward my best efforts for Kenkre FC and win tournaments” affirmed the 25-year-old, with a broad grin.