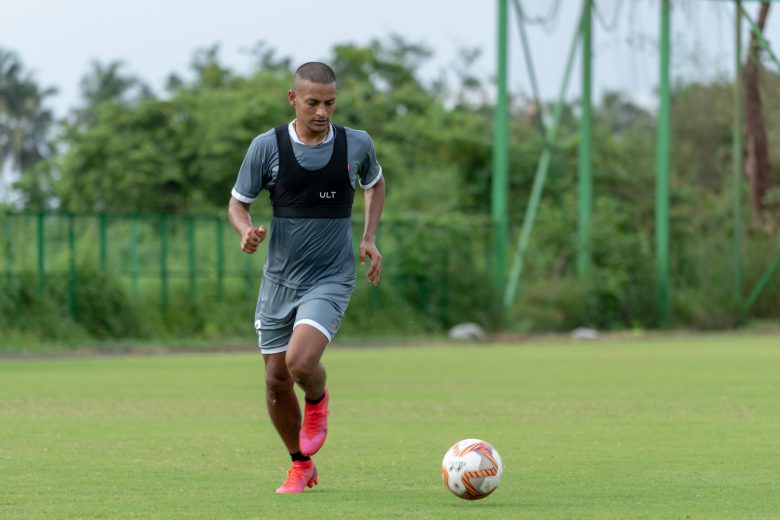 ~ The right-back shone bright on his ACL debut ~

Goa, April 15, 2021: “I just knew that I had to be at my best in the game. It was a very important game for us, but we were not afraid,” said Seriton Ferandnes after FC Goa clinched a point on a historic night for the Gaurs in the AFC Champions League on Wednesday night.

Juan Ferrando’s tactics worked to a tee for FC Goa yesterday as the Gaurs played fearlessly in their opening encounter of the AFC Champions League to eke out a deserved point against Qatari giants Al Rayyan. And not many embodied that spirit as well as Seriton Fernandes in the FC Goa colours.

“The coach told us to go out and enjoy the game, to play without fear. I knew that I had to keep making my forward runs because the overlapping runs really put a lot of pressure on their defence,” added Seriton. Speaking to the coach, before the game, he told me to be fearless about going forward.”

The men in orange not only showed discipline all over the park, but also were able to stay true to their style of football. Ferrando’s men showed both grit and panache to carve out spaces – both in the centre of the park and on the wings time and again.

“It was a big match for us and we came through really well. So yeah, I am feeling really good about our performance and the result,” Seriton continued.

“We knew Al Rayyan would be a really tough game and we had to be at our best. We gave our all on the pitch. We enjoyed the game and sadly missed out on a few opportunities that we had created.”

Seriton Fernandes, on the right flank, had a game to remember. Up against Yacine Brahimi, Al Rayyan’s most prolific player, Seriton was able to keep a check on him for large parts of the game while also providing the Gaurs with a real outlet on the wings with his surging runs forward.

“I knew that he was going to be a problem. I had heard a lot and people were telling me that he is one of the best players in the competition. So I had taken that up as a challenge,” added Seriton.

“And I put in my best effort to take care of the threat he poses and I will have to keep doing that as the upcoming games won’t be any easier.”

After successfully completing the Al-Rayyan test, FC Goa now take on Al-Wahda on Saturday. The team from UAE opened their campaign with a 0-1 loss to Persepolis and will be looking to get one over the Gaurs. However, as Al Rayyan had to learn the hard way, this would be no mean task.

FC Goa is a professional football club based out of Goa that competes in the Indian Super League (ISL) and is the current holder of the Super Cup.  Nicknamed the Gaurs, FC Goa has been one of the most consistent teams in the ISL – reaching 4 semi-finals and 2 finals in 7 seasons.

In Season 2019/20, the club won the Hero ISL League Winners Shield, by finishing top of the table in the league stages and became the first-ever club from India to qualify for the group stages of the AFC Champions League.

Co-owned by Mr Jaydev Mody, Mr Akshay Tandon and Mr Virat Kohli, FC Goa is one of the few Indian Clubs to have a complete youth development ecosystem. Its U14, U16, U18 and Developmental Teams compete at the highest levels in Goa and nationally. The system has produced recognizable talents like Saviour Gama, Princeton Rebello and many more.

This is a good moment for Indian Football, says Juan Ferrando
ACL clean sheet against Al Rayyan one of the best moments of my career: Dheeraj Singh