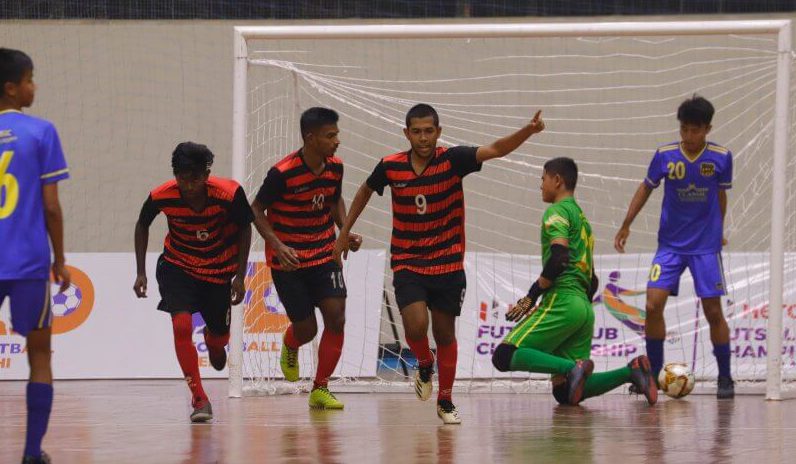 Mangala Club was the final team to complete the semifinal line-up of the Hero Futsal Club Championship 2021-22, having trounced Classic Football Academy 6-4 in the final match of the group stage.

With that win, the side from Odisha booked their ticket to the final four of the tournament. They will now lock horns with Delhi FC in the second semifinal on Friday (November 12, 2021).

Coming into the tie, Classic Football Academy needed only one point to top the group, whereas Mangala needed an out-and-out win to make it to the final four.

Classic Football Academy had a blistering start to the match, having scored two quickfire goals within the first 10 minutes through Ganningam Malangmei. He completed his hat-trick within minutes, but the Odisha outfit breached the Manipuri defense twice in between.

Bapuni Bindhani and Babul Kumar Rout were on the scoresheet for Mangala FC to leave the fate of the match hanging on tenterhooks at the halfway mark. Classic Football Academy were leading the tie 3-2 at the lemon break.

Mangala came out with renewed vigor and finesse as Babul completed his brace seconds within the resumption. It was 3-3, all level on the scoreboard!

Chungkham put Classic Football Academy back on track once again before leaking back-to-back goals, as Mangala skipper Dinanbandhu Das netted the goals. Mangala were awarded a penalty as Classic goalkeeper Charan Singh was adjudged to have committed a foul inside the area. Dinabandhu duly converted the penalty to put Mangala in the driver’s seat with seven minutes to go.

Mangala were mounting the pressure on their opposition and Samson fouled Bapuni closer to the half-line in the 35th minute. Samson got the marching orders and Mangala earned a 10-meter kick, only to see Dinabandhu miss the target.

Classic Football Academy were trying tooth and nail to find the elusive equalizer but, in the process, Mangala had the last laugh three and half minutes to the final whistle. Dinabandhu, Babul and Bapuni were on the move in a swift counter-attack against only one defender. Dinabandhu rolled it to Babul and the number 9 made no mistake to double their lead, thus securing the points and a semi-final spot for Mangala Club.

Delhi FC stormed past 7Wasa United on Wednesday (November 10, 2021) to confirm their semi-final spot in the first edition of the Hero Futsal Club Championship. The Delhi outfit netted 15 times to register a mammoth 15-4 victory, and in the process, made it to the semis with a 100 percent win record.

Rohit Mulchandani scored the first goal in the 6th minute before the opponents equalized within minutes through Primrose. Lalpekhlua rose to the occasion to put his team in the driver’s seat once again within four minutes.

The Meghalaya outfit were right into the money having found the equalizer within 3 minutes through Riburom Jat followed by another goal by Civility to put them in the lead for the first time in the match.

7Wasa United headed to the dressing rooms with a 3-2 lead over Delhi FC.

It was a completely different story in the second half, however. Lalpekhlua scored the equalizer within seconds and that opened the floodgates for the Delhi outfit. Nikhil Mali joined the party in the 23rd minute from the penalty spot. Eight minutes later, they scored back-to-back goals to consolidate their position.

The club from the Capital slammed in nine goals in as many minutes at the end to waltz into the semifinals.

Nikhil Mali hammered the final nail in the coffin a minute before Gwgwmsar Gayary and Tejas Bhandari joined the party. Delhi FC have scored 44 goals in 3 matches, having leaked only 11 times. They will face Group D toppers in the second semifinal on Friday (November 12).