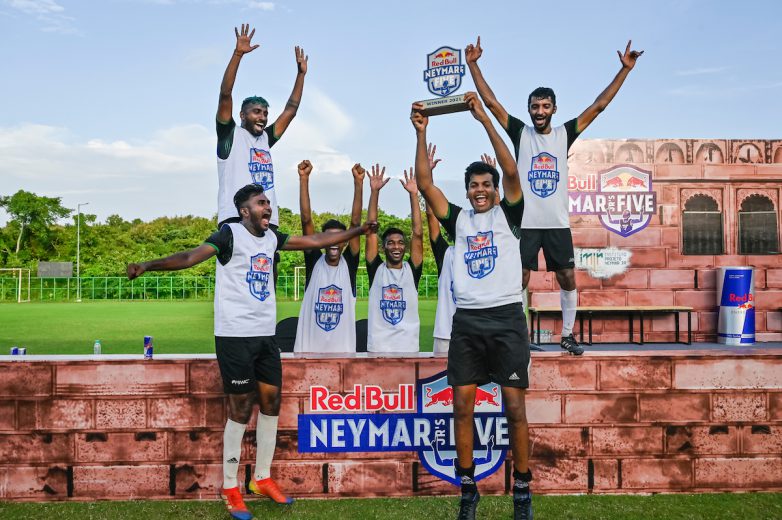 ~ National Finals of the largest 5 a side football tournament in India took place at Ella Ground, Carambolim in Goa on 24th September 2021~

25th September 2021, India: Red Bull Neymar Jr’s Five returned for its fifth year in India with more than 2700 teams participating in qualifiers across the country. The 2021 edition of the championship had qualifiers in 18 cities across India which took place through the months of August and September, with the winning team of each city qualifier competing at the National Final at Ella Ground, Carambolim in Goa on Friday 24th September. The 4 teams which grabbed their spot in the semi-finals were Kalina Rangers from Goa, Sunny Boys from Pune, Black & White FC from Kochi and Zack FC from Delhi. In the semis, Kalina Rangers beat Black & White FC and Sunny Boys beat Zack FC Delhi (both 1-0). Goa city qualifier winning team, Kalina Rangers beat Pune city qualifier winning team Sunny Boys 2-0 in the final match to be declared the Red Bull Neymar Jr’s Five India champions and earned the opportunity to compete in the world finals in Qatar, where they will get to meet superstar footballer Neymar Jr.

Red Bull Neymar Jr’s Five is the Brazilian star’s signature five-a-side tournament bringing players aged 16 to 35 from all corners of the world together to celebrate their shared passion: football. It is a fast, technical and fun competition which sees two teams of five players, sans a goalkeeper, have 10 minutes to strut their stuff and win a chance to impress Neymar Jr. The twist in this thrilling affair is that for each goal scored by a team, a member of the opposition will have to leave the field. The team with the maximum players takes the spoils.

Red Bull Neymar Jr’s Five 2019 India Champions, Kalina Rangers from Mumbai represented India at the World Finals in Brazil and gained valuable experience with a historic win against Hungary, who were eventually crowned winners of the tournament. Some members from this team are part of the 2021 national champion squad which will travel to Qatar to compete at the world finals of the 2021 edition.

Clinton Dsouza from Kalina Rangers, winning team member expressed his joy over winning the Red Bull Neymar Jr’s Five 2021 National Finals, he said, “We are delighted to win the Red Bull Neymar Jr’s Five 2021 National Finals. Even during challenging times, we have been practicing a lot before this tournament started as we know we have to play against some of the best 5-a-side teams in the finals. We would like to thank the energy drink giant Red Bull for tournaments like these that give wings to young and upcoming footballers in India. We are proud to represent India at the World Finals in Qatar and we hope to make our nation proud.”

Indore: 21st and 22nd August at Jogabonito by Futsal One won by Chirag United

Also, it is a proud moment for India as Kerala Teenager, Shahzad Rafi and Bengaluru youngster, Abhinash Shanmugham are among the seven talented ballers from across the world who have been selected to form a special team at the 2021 Red Bull Neymar Jr’s Five World Final in Qatar later this year. They were shortlisted from over a million entries and made the cut from final 33,000 videos from all over the world, clips of their tastiest tricks and skills over the last few months as they attempted to wow the judging panel. Entries came in from all corners of the globe as these gifted amateur players posted 60-second clips to their Instagram channel using the hashtag #outplaythemall. After hours spent viewing the footage, Neymar Jr and his fellow judges finally settled on their seven-strong squad.

For more information and video highlights of the national finals visit: https://www.redbull.com/in-en/events/red-bull-neymar-jrs-five-india-2021

Also Read: “The aim is to qualify and gain promotion in the I-league”, says Kenkre FC Coach- Akhil Kothari